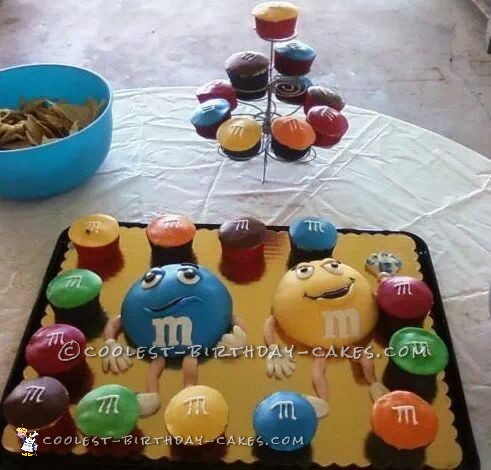 After making and decorating several butter cream cakes, I decided I was ready to venture into the world of fondant.  I loved the look of fondant cakes and thought just how hard could it be?  Needless to say, I would soon find out!  My best friend called one afternoon and asked if I would care to make her son’s cake for his birthday party that following weekend.  Sure! That was my reply before I even had time to think and so it began.

She proceeded to tell me the theme was M & M candies!  She then went on to tell me I could do the cake however I wanted as long as it was something easy for me with not a lot of time involved (easy and not a lot of time involved would be two things this project would lack). I would soon realize this.  I was about to embark upon a little adventure with fondant and M & M candies in hopes of making a little boy’s birthday something he would always remember.

After much thought and jotting down my ideas on paper, I decided on the perfect cake which would be the highlight of the party or so I hoped it would be.  How could M & M characters and cupcakes not be a hit and how difficult could it be?  Three hours into decorating, I was beginning to answer my my question.  I realized it was more difficult than this little Tennessee want to be cake decorator could have imagined.  I worked up into the wee hours of the morning and right before my eyes, I saw little M & M characters come together! It was going to be one of my coolest cake projects ever and one that I would always remember.

The cakes were the hit of the party. I was very proud of myself but to get the comments and reactions upon seeing my ideas come together in this cake was priceless.  Nobody wanted to cut the cakes because they kept looking at them and kept saying how cool they were.  An hour and a half into the party and after all the cupcakes were consumed, the cake was cut!  So as it goes, sometimes you feel like a nut or a peanut M & M I should say, sometimes you don’t!   I was feeling like I was going to go nuts in the wee hours of the morning as I continued to work to make this one of the most memorable cakes as well as accomplishments I ever did!