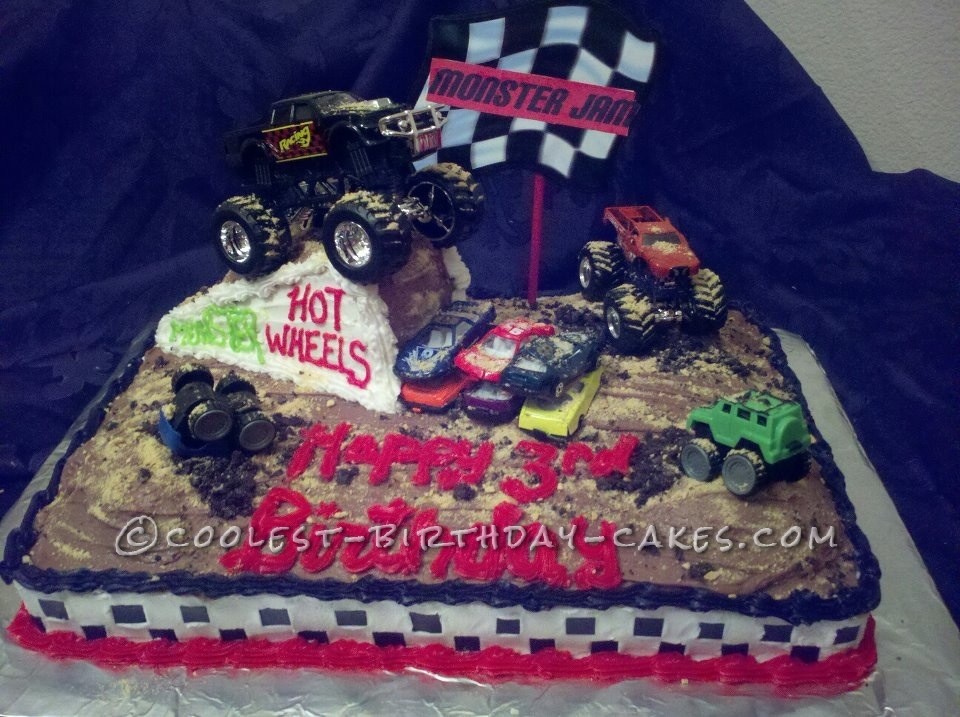 Talk about nervous, this was the first themed cake I had tried. My nephew wanted a Monster Jam Cake. I didn’t know where to begin but the creative juices started flowing and I had so much fun with this! The cake was chocolate and vanilla. I didn’t know much about fondant so the checkered border I cut out on sugar sheets. The ramp and little mounds were made out of Rice Krispie treats. I failed a few times on the ramp but I couldn’t stop, I had a vision for this cake so I kept going.

For the “dirt and mud” I used crushed graham crackers and crushed Oreo’s. The funniest part for me was smashing the matchbox cars with a hammer. My nephew helped me with this part. I have never been to a Monster Jam Rally but I guess the cars are damaged so we damaged them and put them at the bottom of the ramp and flipped some over. It was like being a little kid all over again. I spent about 8 hours working on this cake. As I was watching to come together I couldn’t believe the vision for this cake was becoming a reality!

Then I had to transport the cake to the birthday party, I was so scared. I thought for sure I would drop his cake and his birthday party would be destroyed. I had nightmares about this but thankfully the drive to the birthday party, in the Texas heat, the cake survived. It made a beautiful display, his parents reaction was pure entertainment and my nephew couldn’t believe he was gonna get to eat that cake. He of course decided he had to play in it first. He wanted to play with the cars and take off the Monster truck first. His parents persuaded him to wait. All the parents kept taking pictures and couldn’t believe I made this. I was so excited, all of the hard work was a success. Anything is possible if you put your mind to it.