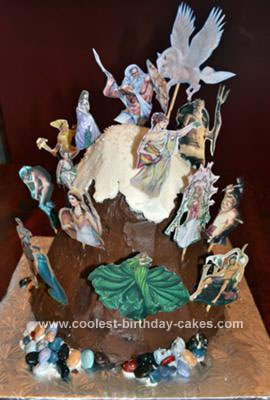 My daughter loves myths so for her 10th birthday she asked for a Mount Olympus cake. The cake itself wasn’t hard; I made two chocolate cake recipes and divided the batter between 4 decreasing size cake tins. Then I stacked them – filling between each layer, and only splitting the smallest, as it was the thickest. I saved enough batter to make one cupcake which became the peak of the mountain. I covered and filled it with chocolate butter cream.

Then I made some very simple white icing and made the snow. I put it over top the chocolate butter cream (the top piece was a serious sugar hit as a result). Then I sprinkled the snow with white crystalline sprinkles I happened to have leftover from Christmas cookie decorating.

The decorations had me though, as plastic god figures aren’t that easy to come by, and I quailed at the thought of modelling them out of fondant. So instead I downloaded and shrunk pictures of gods and goddesses. This took some time, as they’re not all in one place, and I wanted them to sort of match in look. I cut them out very carefully and taped them to toothpicks then stuck them in the mountain.

The rocks at the bottom are chocolate filled rocks – not sure if they were necessary but my daughter loved it. The candles were long curly gold tapers and the whole effect was pretty impressive for a simple cake.