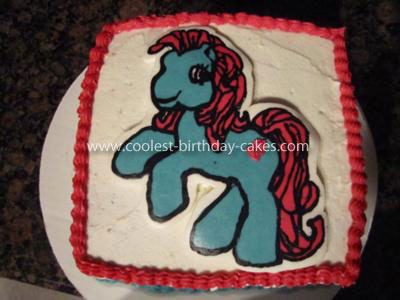 I made this My Little Pony Cake using a frozen buttercream transfer. It was my first time attempting it and I feel it was a success! I made my own buttercream recipe (it must contain half butter and half Crisco so that it freezes properly) and I found the pony image I wanted to use online. I saved the picture to the computer and opened it up in paint and reversed the image and printed it.

I taped the image to a cardboard sheet and then taped wax paper on top of the image. I used a tip 5 to outline the image and then placed it in the freezer for about 10 minutes. In the mean time, I colored my buttercream the color I wanted, popped it out of the freezer and filled in the design with the colors. A word of caution, using more buttercream is better than less in this situation; I have found that the thicker the layer of buttercrem it, the faster it freezes it becomes easier to peel away from the wax paper.

Coolest My Little Pony Cake for a 6 Year Old