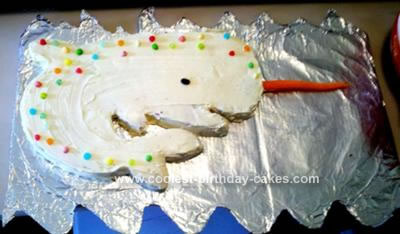 I made this Narwhal Birthday Cake for my girlfriend, as her favorite cake is carrot, and one of her favorite animals is the narwhal. I was inspired by the idea that I could make the horn out of a carrot! This was my first theme cake ever, and although it took me forever to make, it really wasn’t hard. For recipes, I looked on all-recipe.com and used Sam’s Famous Carrot Cake and Cream Cheese Frosting II. Both were pretty delicious.

I baked the cake the night before I decorated it so that it could completely cool, and the top could harden up a little (the cake was still super-moist inside). I made the cake in a very large pan (1.5x the recipe), and laid out enough paper on top to exactly cover the surface of the cake; four sheets of printer paper for me, which I taped together into the right dimensions. I then looked online for narwhal drawings, and found for something simple that would maximize the cake’s surface area. Then I drew it onto the paper and cut it out.

Next I made the board. I took a piece of plywood shelving that was about the same size as my template, and cut a piece of cardboard slightly bigger than the board. I cut out wavy designs on the top and bottom, and covered it with foil. Then I used duct tape to attach the cardboard to the plywood, which worked just great. The cake was still in the pan, so loosened it up around the edges, put a cutting board on top, and flipped the cake onto it so it was upside down.

Then I put two overlapping pieces of waxed paper onto the bottom of the cake, placed the board I had just made over that, and flipped it over onto the waxed paper and cake board. The waxed paper made it so that I could slide the cake around to wherever I wanted it, and it kept crumbs and frosting from getting onto my nice shiny board. I placed my template on top of the cake, and took a sharp little paring knife and cut out my shape.

I whipped up my cream cheese frosting in a Cuisinart so that it was extra smooth, and spread a layer of room temp. frosting over the whole cake. I tried to putty frosting pretty thickly along all of the edges, and was very careful not to re-dip crumbs into my frosting. Once there was a base layer, I put the cake and frosting into the freezer for a few minutes to harden up. This firmer base allowed me to sculpt the edges more precisely, and add another thicker layer without fear of tearing up the cake.

Then I pulled the waxed paper out from under the cake, stuck a peeled carrot into the nose for the horn, and used a black jelly bean for the eye. I cut multi-colored jelly beans in half to use for a rainbow rendition of the spots that nawhals have on their backs. Then it was done! If I would have decorated it with something like piped chocolate or preserves, I would have made a little speech bubble with a birthday message; or if I had thought of it earlier, I could have cut a speech bubble out of cake and written on that.

It was delicious, and very well received.