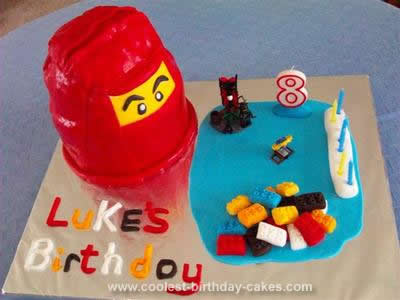 My grandson’s birthday was coming up and he would be 8yrs. He told me that he really wanted a Ninjargo Lego Cake, so I looked on line and ended up at your site which is where I usually go for ideas. I saw a very large Lego head and thought that would be good as I could do just the head of the Ninjargo warrior.

I decided that I would need 3x20cm cakes, one would be chocolate, then vanilla and lastly strawberry. I cheated a bit as they were packet cakes and I usually make them all myself. They all turned out very well, but the strawberry one rose very high on one side, but that was good as I could use that for the very top of head.

Put them in the freezer overnight so that they would be easier to work with and next day made some butter icing to sandwich them all together and put quite a bit over the cake so that the soft Royal Icing would adhere to it. I have an assortment of different colored icings, black, brown, yellow, white, blue and red.

I rolled out some pale yellow icing for the eye brows and eyes to be stuck to and then shaped some black icing for eyes and brows. On the eyes used a very small round of white and attached to one side which made the eyes look more real. Divided the red into 3 pieces, first put some around the lower cake under the eyes, then covered the back and sides leaving the top of the head until last. I rolled a piece to go across above the eye brows and then rolled out the remainder of red icing to go over the top of head. I always finish of the decorating by dipping a pastry brush in water and giving the whole cake a lovely shine.

I used up all the bits of left over icings by making a lot of Lego blocks and letters in all different colors. Everyone was very pleased with the result especially my grandson Luke.