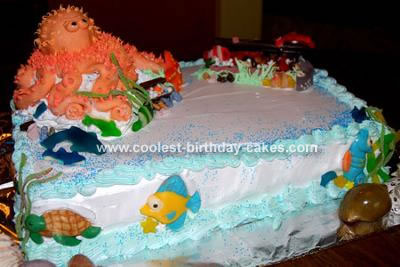 For the octopus cake I used a large rectangular sheet pan. I made 2 cakes and filled them with a chocolate mousse. I also made a 3rd batch of cake mix and poured it in a glass mixing bowl to get a dome shape for the octopus to sit on, as well as some cupcake sizes for added support if needed.

This was my first try at using fondant. I got my idea from the picture of someone’s octopus on top of a sea-themed cake here on this site. I found a recipe for marshmallow fondant and tinted it orange. I frosted the cake dome and molded my octopus on top. I piped on little dots to give my octopus some character.

I made my treasure chests from large and small chocolate bars and filled with various candies. I used colored, meltable chocolates and sea creature molds and made all the candies I placed along the sides. I used green sour strip for seaweed, as well as other various gummy candies to decorate. I used whipped topping and piped on the edges. This cake weighed about 25 pounds. It was the hit of the party! 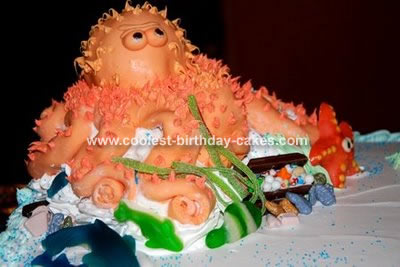