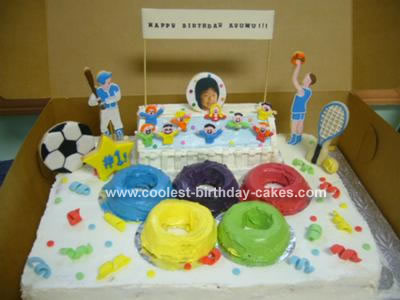 My friend’s son had an Olympic themed birthday party. So, I baked an Olympic cake for that.

I made a rectangular shaped strawberry short cake. On that, I put the symbol mark of the Olympic game, sports themed hard icing cookies,and stadium and audiences.

Olympic symbol and stadium was made with with Italian meraunge cream frosted butter cake.

Audiences was made with royal icing. I put a toothpick to each of them, and inserted them into the cake. There was a cookie with the birthday boy’s edible image picture.

I really enjoyed making it!