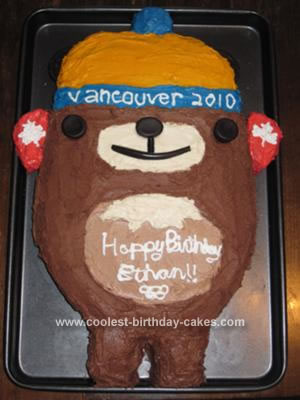 My boys had a joint birthday party the week after the Paralympics/Olympics wrapped up in our hometown, Vancouver. So they both chose mascots as the shape. I worked from a drawing my seven-year-old did of Muk Muk, who my son says is really, really easy to draw, and I had the stuffed Muk Muk with me when I shaped the cake.

I used a 9×12 cake, along with some bits from an 8″ cake to cut out the shape. The ears are Oreo cookies, and the eyes are wine gums and licorice. Everything else is just icing with food colouring.

This homemade Olympic mascot cake wasn’t as hard as I expected, and I think it’s one of my best cakes yet. I also did a Quatchi cake for the other boy, which I’m also posting here. By the way, more kids wanted to eat Muk Muk than Quatchi.