I wanted to make a cake for my husband’s 40th birthday that would really “wow” him, represent his interests and make fun of while still celebrating the big 40. This Homemade Over the Hill 40th Birthday Cake is what I came up with. Since I wanted to use the car of his youth I decided to make a road and have the car reach a washed out road (the end of his youth) with a big 40 in the path (made of rice crispie treats and modeling chocolate).

He had to climb a hill to the “old” section of road in order to continue his path in life. I used four sheet cakes, stacked two high, end to end to create the road. The space between the cakes became the wiped out road. On the youth side I sculpted his old Camaro car out of rice crispie treats and covered it in a mix of white chocolate and fondant. I also included a cheeseburger and fries made of fondant, ice cream from white chocolate, and since he likes to run a running shoe sculpted from white chocolate and a race bib of fondant. I created the hill by stacking crumbled bits of cake to create a rocky pattern and covered it in fondant.

To represent old age I made an icepack using fondant (he’ll need it more when he runs as he ages), an oatmeal container and accompanying bowl of oatmeal (rice crispie treats and fondant), a walking cane, and a prescription bottle (rice crispie treats & fondant). Since old age has its perks I included a business card of his new company made of fondant and a big Starbucks cup (they are a client of his) also sculpted from rice crispie treats and white chocolate. Last, I made a little figure of my husband out of fondant and white chocolate. The coffee cup was actually too heavy to sit on the cake so I just placed it off the side of the cake.

My husband loves rice crispie treats so he was thrilled with all the crispie treats to eat. This cake took forever to create but was well worth the effort. It was huge though and even with a lot of party guests we had tons of leftover cake! 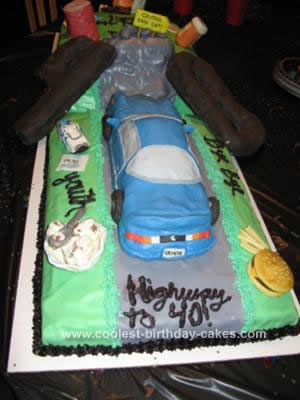 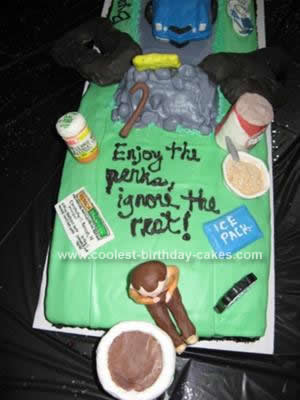 Coolest Over the Hill Cake

Coolest Over the Hill Birthday Cake