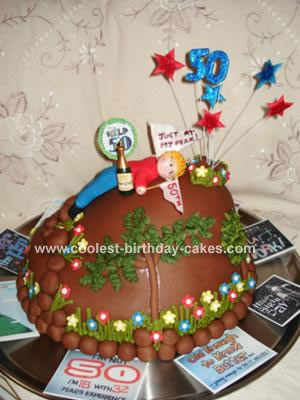 I made the man out of fondant strengthened with gum tragacanth and made him to look a bit like the recipient, including the gold framed glasses! I covered the assembled cake and pudding with plastic chocolate icing kneaded together with MMF and extra melted chocolate. Very messy to do and hard work to knead but a much nicer result than just plastic chocolate to eat.

The rocks and tree trunks are also the chocolate icing mix which I then piped leaves onto. I also piped the grass and then added the little blossoms which are made out of sugarpaste strengthened with gum tragacanth. I made his flags out of pieces of rice paper attached to spaghetti with edible glue,(gum tragacanth and water). I also made a sugarpaste 5 and 0 and some stars on wires which I brushed with glue and sprinkled with edible glitter. I then added some 50 quotes around the base of the cake for extra colour and a touch of humour.

These I get from the internet and laminate. I then added the champagne candle. Voila!