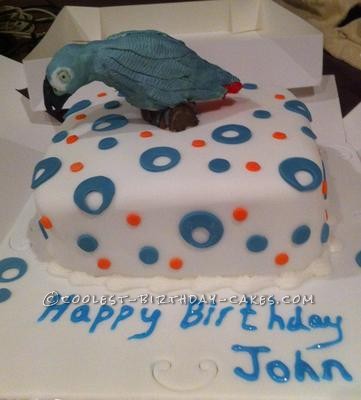 I was asked to make a cake with a parrot on the top because her partner loved parrots. I started by making the parrot because it had to dry out in stages. I placed a wooden chop stick into a cake dummy and wrapped some wire round it to form the head and the tail of the parrot. I then started to attach roll out icing to the wire. I used roll out icing and flower paste so that it hardened. When I’d got the basic shape, I made indent for the parrots eyes to be filled in later. I left it a few days to harden. I colored the parrot in grey and the tail red, omitting where the eyes were. I did this using black and white food coloring paste mixed with alcohol for the grey and red with alcohol for the tail.

When it was dry I colored some icing, again in grey and started to cut out the feathers for the bird and attached them one by one until it was finished.Then I made the beak, I then filled in the eye holes with white royal icing and with black food coloring. I painted a dot for the pupil. This was left a few days to harden again. I now needed to make the parrots feet. I took the bird off the stick and lay it on its side so it didn’t fall over and at the base of the stick where I had just removed the bird, I started to make a perch and the birds feet. I used my modelling tools to do this, this was left overnight to harden before painting. When it had been painted, and was dry I attached the bird to the perch and feet using a little royal icing and left it in the cake dummy until the cake was iced.

I baked a 10” square sponge cake and left this to go cold. I then placed it on a 14” board near the back of the board. I then filled with butter cream and jam and covered the whole cake in butter cream and placed in the freezer for 10 mins. Meanwhile I rolled out some ready made roll out icing in white and when the cake was chilled I covered it in the icing. I then pipe iced at the base of the cake.

I then attached the parrot in the center of the cake and then colored some icing in blue and cut out circles with holes in them with piping tubes, and attached them to the cake then colored some icing in red and cut out small circles and dotted them about. Finally I covered the board in roll out icing and the pipe iced a message and sprinkled the message with glitter. The cake was now finished. 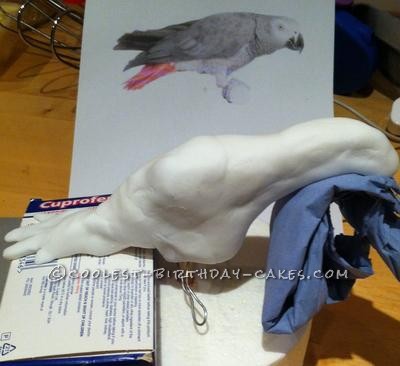 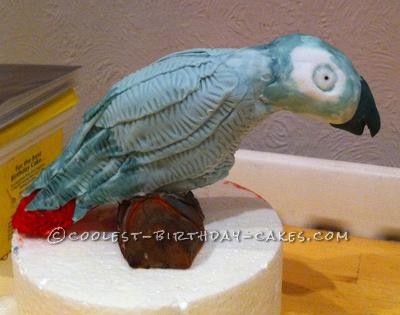