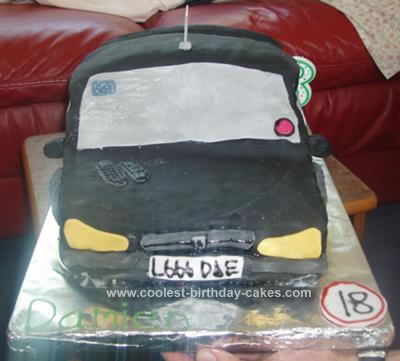 I made this Peugeot Cake for my brother’s 18th birthday. It is an exact replica of his car, a Peugeot 206, and was my first attempt at a cake. Because I was inexperienced in cake making, I only left myself a day in which to do it, and ended up rushing to complete it in time.

I made a Madeira cake because it can be shaped easily, which I sliced into the shape of a car and was made entirely of cake and icing with the only inedible item being the plastic aerial. I drew the outline of the doors by scoring it with a knife, and I used a toothpick to secure the wing mirrors.

The details on the hubcaps were iced-on while the marks on the tires were also scored with a knife. I enjoyed making this cake because it was new for me and I knew it would be a big surprise for my brother!