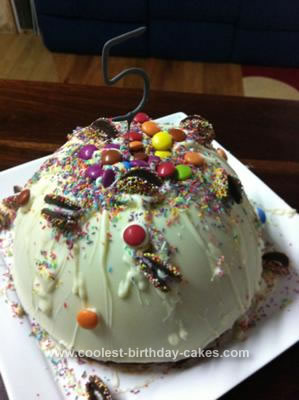 Inspiration for this Pinata Smash Cake came in the form of my small energetic daughter Amy, who was about to turn 5. She wanted a “smash cake”, which she described as being similar to a pinata. As we were having a pinata for her party as well, I thought I’d have a go at this cake – which as it turns out is the easiest cake to make ever.

The idea is that you make a cake which “hides” underneath a round chocolate shell, filled with lollies, chocolate coins, snakes and other delicious bounty. When the candles are blown out the shell is smashed with a hammer and the goodies underneath uncovered.

So just make any old favorite cake you like to go underneath, but make sure you have a steel round bowl which will fit over the top of this cake (this is what you make your chocolate shell in).

I just used a favorite go-to 5 minute cupcake recipe and had it in the freezer for a few weeks, I cut a small indentation out of the top of it and covered it with chocolate Vienna or butter cream icing.

Then I got my steel bowl and a packet of white chocolate “melts”, 375g and melted them on the stove top. I used spray oil to coat the inside of the bowl. This is fantastic and gives a lusty sheen as well when the shell slides out.

When the white chocolate was melted I swished it around the bowl, trying to make sure to give it an even coat. It seemed to be taking a good while to slow down so I kneaded in front of the open freezer door to help it “set” as I was swishing. When it slowed down it went into the freezer for 20 minutes.

In the meantime I got the cake out of the freezer and added the goodies to the top of the cake – as if they were exploding out of it. After 20 minutes had passed I took the bowl out of the freezer, ran a clean cloth under hot water and pressed it on the outside of the bowl. This just warmed it up enough to slide on out and I placed it over the cake.

Then I melted some more white chocolate and drizzled it all down the sides, adding some sprinkles, half freckles and other girly bits to make a very pretty smash cake.

The end result was a whooping excitement as it took Amy a good 30 seconds to smash into the cake – then picture if you will 25 squealing 5 year old girls coming in to swoop on the bounty, and you get an idea of the gorgeous chaos this cake created. And it was yummy too.