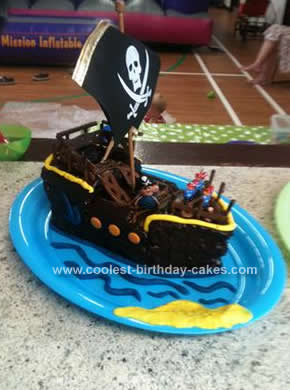 First step for this pirate ship cake was to make two rectangular cakes of equal length and width. I used a Silverwood adjustable cake tin for this – it was ideal to make two identical cakes!

I decided to make a basic marble cake, as it’s quite dense but moist – and since I’d be icing the cake with chocolate I didn’t want the entire sponge to be chocolate too.

On one rectangular cake, I cut away either side at an angle on one end, leaving a shape like a wide pencil. Following that, I did exactly the same to the second cake, but then cut it into three pieces of equal length. I then placed the second cake on top of the first, and removed the middle slice of the top one and cut it in half horizontally, placing one half of the cut piece back on to the lower cake, and the other half on top of the other square slice. This gave a three level effect with the highest part at the rear, lower part in the middle and then slightly higher part again at the triangular shaped front.

I used Nutella to stick all the various pieces together, and then got around to making the icing.

For this I used 200g dark chocolate, four tablespoons of water and 150g butter – melted together in a glass bowl over a simmering saucepan of water. This forms a nice glossy and fairly runny chocolate mixture which I then spooned over the cake until it was completely covered (I put the cake on top of a flexible chopping board for this part). Then, I left it to cool.

Once it was cooled, the icing had set and the cake was looking more ship like – so then on to the embellishments!

I used Mikado sticks (biscuit sticks tipped in chocolate) to hold it all together, and made ‘railings’ for the front and rear of the ship. Next I melted some Belgian milk chocolate, and after leaving it to cool for a minute or two, piped this across the ship to create ‘planks’ on the deck. Two pieces of Curly Wurly led from the rear deck to the middle deck as well as lining the rear railings, and Matchmakers formed the tops of the railings, followed orange chocolate buttons stuck to the side to be excellent portholes. Lastly, I added a couple of chocolate fingers to either side of the middle deck to prevent the pirates from slipping overboard.

Long yellow strips of colored icing were used to accentuate the front and rear decks, with the leftovers making a sandy beach on the large blue plate (sea) that I placed the cake on. Blue icing added to the plate made rippling waves and I also placed a blue strip around the entire bottom of the cake to prevent icing ‘leakage’ (it was rather a hot day, so just in case!) as well as making a blue anchor to stick to the side of the ship.

George Pig was then crafted from some black and red icing, a bit of white icing to mix with the red to form pink, and a bit of the leftover blue icing. I used a black cake decorating pen to pick out the fine detail, and voila – one George Pig Pirate.

So the entire cake and decoration was edible, basically. That just left the mast and flag, and deciding that an inedible option was going to be infinitely easier for that, I opted for one of my bamboo knitting needles, and the cut out middle section of a hat I got in Poundland as the flag.

Three pirate candles added to the front of the ship, and were ready to set sail :) 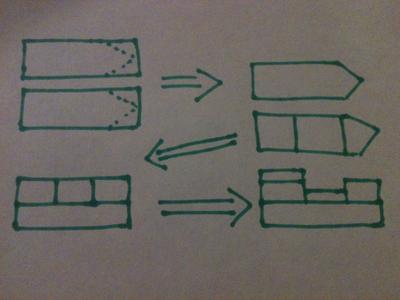