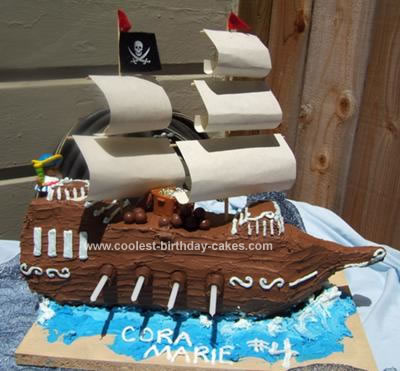 For my daughter’s 4th birthday, we had a “buccaneer bash” which wouldn’t have been complete without a Pirate Ship Birthday Cake. This was made from dense peanut butter cake with peanut butter & chocolate ganache filling and chocolate buttercream icing, surrounded by vanilla buttercream ocean.

Paper and wooden dowels were used to masts & sails, topped with a Jolly Roger flag, of course. A few decorative toy additions and Rolo cannons + candles (with malted milk-ball cannons on deck), and voila!