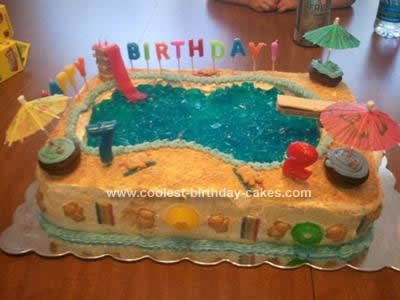 I made this Homemade Pool Party Birthday Cake for 2 of my boys. I used 2 13×9 pans. I baked them both and placed them in the fridge for easier frosting. When they were cooled I placed them on a Walton cake sheet, then placed them on top of each other and carved out the pool shape in the top layer.

I made a homemade butter cream frosting for the cake. I then frosted the entire cake as well as where I had cut out the pool. I used crushed up graham crackers for the dirt. Earlier I had prepared blue jello for the water. For the people I used teddy graham cookies. For the tables I had baked mini cupcakes then frosted them and used cocktail parasols for the umbrellas.

For the towels and floats I had purchased sour candy strips and cut them into pieces. I also used those strips to make drinks which I placed on each table. For the diving board and slide I used wafer cookies and frosted them together. I also used toothpicks in order to hold them in place better.

For the ladder behind the slide I used pretzel sticks and broke them into the size I needed them and used the frosting to hold them together. I also bought a powdered doughnut and shoelace licorice to make the life float that I placed in the side of the cake. I also placed some jelly circled candies as well as teddy grahams and some of the sour strips to decorate the side of the cake. 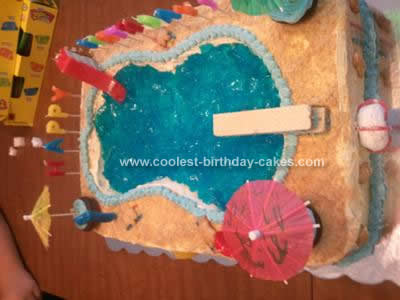 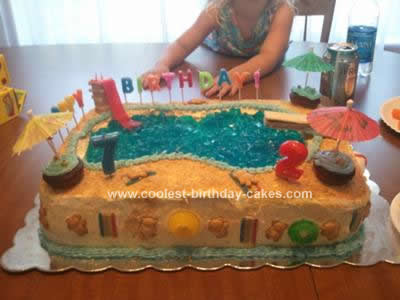 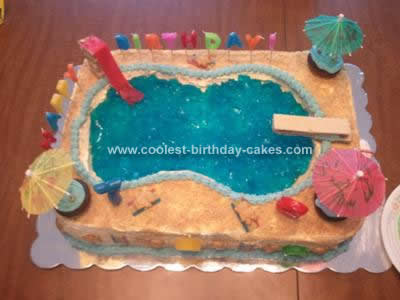