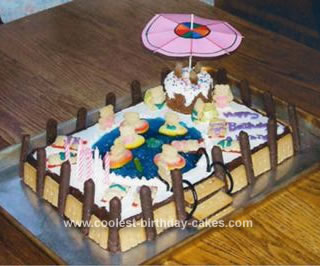 I made this swimming pool party cake by request for my granddaughter for her ninth birthday. I prepared a dense chocolate cake in a 9 by 13 inch pan with one cupcake from the batter for the table that was iced with white icing to look like a tablecloth topped with sprinkles and 3 gummy cokes and an umbrella.

When the cake was well cooled I used an upside down soup bowl for a guide and cut a complete circle right out of the cake. I sliced that in half and returned the solid thinner layer back into the hole for the bottom of the “pool” (you could also just scoop out some of the cake to make the shape of the pool.

The top of the cake and inside of the pool was iced with white icing the sides were iced with chocolate icing purchased at the grocery store. The sides are finished with vanilla wafers broken in half and chocolate fingers (as well as the steps). The handrail is licorice whip.

I prepared the teddy graham bears by icing bikinis and trunks on using “scribblers” (icing in little tubes purchased at the grocery store)*** doing that ahead of time so the icing would set and dry. I cut fruit Yogo roll ups for towels with fringe and the air mattress in the pool. I was able to stretch the gummy rings and slide the teddies in to float on the berry blue jello in the pool. I made the jello using 1 cup less water than the recipe called for letting it almost set and whipped it up before scooping it in at the very last. The stools are foil wrapped upside down mini peanut butter cups. Even a few gummy fish found their way into the pool.

I prepared the entire cake ahead, adding the jello after the icing had set and the cake was chilled.