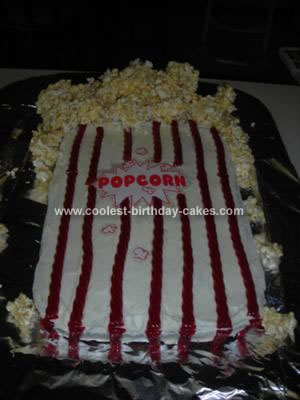 For my son’s sixth birthday, he wanted a cake that resembled a popcorn box. Since all I had to do was bake a 9×13 rectangular cake and decorate it, I decided it was a perfect (and easy) choice!

After frosting the popcorn birthday cake with white vanilla icing, I cut out and laminated the “popcorn” wording from a real popcorn bag I purchased from Target (found in the birthday goodie bag/trinket section; I think it cost a couple dollars for 10 bags). Then I carefully placed it in the middle of the cake and cut and arranged red licorice to look like the lines of a real popcorn box.

After that, I made a “rice krispie treat” recipe with popcorn instead of rice cereal and laid it out so it looked like it was coming out of the popcorn box cake. The only real problem I encountered was cutting the cake for serving. My knife wouldn’t go through the licorice very well, so I just used kitchen shears to snip through it while I was serving.