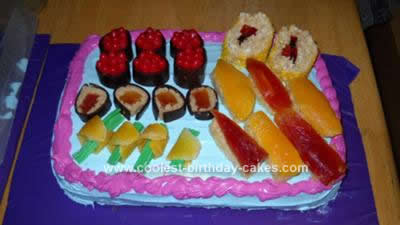 I made a Sushi Cake Design for my daughter’s 15th birthday after studying every online resource I could find and watching a video on making sushi and reading a sushi cookbook.

The first thing I learned was, dark green fruit roll ups DO NOT EXIST. What I ended up using for Nori was grape fruit leather which was dark enough and had the correct texture to pass. It comes in narrow strips, but could still be cut in thirds. I found it in the health food isle of the grocery store.

I think the most important lesson I learned was that I didn’t need to make the rice cereal treats myself. You can buy them packaged at the store and it is so worth it! I was making this during an incredibly humid period in July, and the ones I made just fell apart and I basically threw out two whole trays of them and ended up working with pre made ones except for the California roll I made. But you could do that with the pre-made rice cereal treats too and I STRONGLY RECOMMEND YOU DO! I also found a simple sushi cookbook is a great resource just for the pictures.

For the “Sashimi Sushi” with the wrapped around the green “chives” I took some dried mango and sprayed just one spritzed of light oil or butter spray on it and rubbed it in. This brings the mango to life and makes it look like fresh fish. I then took the green Twizzler and cut them into short lengths and shredded the ends as much as I could and then wrapped the mango around the Twizzler. I held the roll together tightly with a toothpick over night.

I took pieces of dried mango and papaya and spritzed them with light oil or butter spray and rubbed it in. This made the mango and papaya look like fresh fish. I thought the papaya looked exactly like tuna! Then I made little “pillows” per my sushi cook book out of a piece of a rice cereal bar and covered it with my “fish” I made enough to have alternating colors because half of enjoying sushi is presentation.

I took the grape, fruit leather and formed a band then pressed rice cereal treats in to it. The hot humid weather worked against me because I had trouble keeping things stuck together so I think I would get dark toothpicks next time to be sure everything would hold together and not slip in the heat. Then, I put glitter gel icing on the rice cereal and then placed the jelly beans inside to look like the salmon roe. I was looking for mini jelly beans but couldn’t find them and am always on the lookout for a more translucent candy to stand in for salmon roe but so far have had no luck.

This was a challenge with the heat especially. I took the fruit leather and took the pre-made rice cereal treats apart so I could form a thin layer of “rice” then I took papaya and put it in the middle. This was kind of awkward because the papaya was a lot longer than the fruit leather and rice roll but I rolled the three together as tightly as I could and cut four slices. I think that if you wrap them using plastic wrap or wax paper and then freezing over night, slicing may be easier. I had the same problem keeping the fruit leather sealed I think again, dark toothpicks would need to be used to ensure everything staying together.

This was the only thing I made with the rice cereal treats I made myself, but I think it would have been easy enough to use the pre made ones and just stick them together. I put a rectangle of the rice cereal and marshmallow mixture on a square of wax paper on a sushi mat. I put three gummy worms in it to give color. I rolled it just like you would a real California roll and then I very carefully covered the roll in orange sanding sugar which imitates the flying fish roe. I froze that overnight before slicing that with a serrated knife.

When I placed it on the cake I tried to be very linear and orderly with straight lines. My edging is not perfect but I think that the sushi came out good enough to make up for it.

This cake was a lot of fun to make. These little pieces would also make a great presentation on cupcakes!