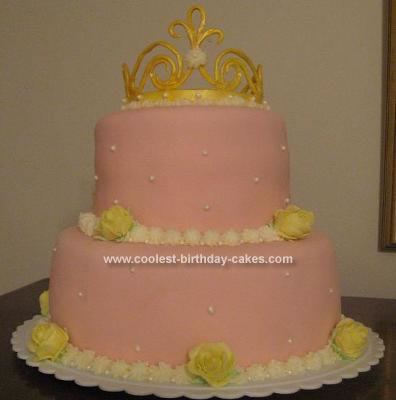 My daughter wanted a princess cake for her 5th birthday party so I started gathering ideas for what to put together. I got the idea for the tiara on top of the cake from a book called Confetti Cakes for Kids by Elisa Strauss. In the book, there is a template that I photocopied and formed gum paste around the template, using water to seal all of the pieces together. I formed it on top of wax paper and formed the wax paper around a coffee tin for about 4 days to let it fully harden. Once the tiara was completely hard, I removed it from the tin and painted it with gold shimmer dust mixed with a very small amount of water and let it dry.

On the internet I found a description for making gum paste roses. My daughter really wanted to be able to eat the roses so I opted for fondant over gum paste as it tastes a bit better and doesn’t get rock hard like gum paste. For each rose I used flower cutters to make 3 flowers, used a baller to push in varying sides and the center depending upon which layer of the rose I was working on, formed it all around a toothpick using water on a paint brush to make it stick, then cut out the green piece for the underside and added it to the rose. Once it was formed around the toothpick, I put the toothpick through the hole in the center of a medium flower former and pulled the toothpick out of the bottom. I let the flowers dry for a few days before storing them to make the cake.

The recipes for the Princess Crown Birthday Cake were derived from the book Vegan Cupcakes Take Over the World. I am a vegan so the entire cake was made without animal products. The bottom tier is 3 layers of chocolate cake with chocolate mousse in between the layers. The top tier is 3 layers of vanilla cake with buttercream icing in between the layers. Both cakes were covered with a very thin layer of buttercream icing to make the fondant stick.

I bought plain white fondant and used food coloring to dye it pink. I then rolled it out and laid it across the two separate tiers of the cake and trimmed the edges. The bottom edges are decorated using buttercream icing and edible pearls and then the fondant flowers were placed on. The edible pearls on the sides of the tiers are held on by a tiny dot of icing.