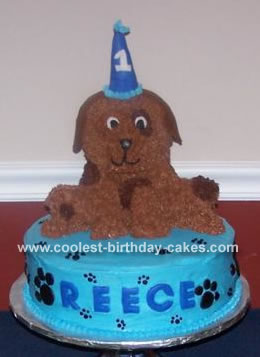 I made this puppy dog cake for my son’s first birthday since he loves our two pet dogs.

First, I baked a two layer 12 inch round cake and iced it in blue buttercream icing. Black icing was used for the paw prints and I used fondant letters to spell my child’s name on the front of the cake.

Next, I used the Wilton Stand up bear pan to create the dog figure. I used Twinkies cut in half for the dog’s back paws and snout(use a toothpick to attach the Twinkies to the cake) and then I covered the entire dog in brown icing using a star shaped tip.

For the ears I used fondant cutouts and draped them over the upright ears of the bear figurine. I used black icing for the mouth, eyes and nose. I created the front paws and legs by building up icing until the shape of the legs and paws became apparent. Next I created the dog’s party hat by covering an ice cream cone in blue icing and attaching a number 1 made of fondant. As a final touch I added a fondant tail to the dog!

The cake was quite large so I had plenty of leftovers for our guests to take home. We finished the theme of the party with dog plates and napkins with paw prints.