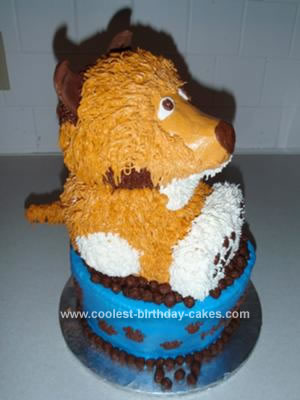 I needed to make a birthday cake for a girl who wanted a dog theme. I gathered ideas from various sites, especially this one where someone posted a Dalmatian cake in a dog bowl. I was attempting to make a collie cake so I used orange, brown, and white frosting (the brown was chocolate).

Using the William-Sonoma Build-a-Bear cake pan (already discontinued!) I made the dog by cutting off the ears and tail and then adding on dog ears, a snout extension, and a long skinny tail using home-made gum paste (mmf with gum-tex mixed in.) I smoothed the frosting on the snout/face and did the rest of the dog with the hair/grass tip.

The dog bowl was done with a layer cake (I used the same dense pound cake recipe that came with the bear pan so it could adequately support the dog), tapered, and frosted blue. I made the rim of the bowl with built-up frosting and smoothed it all with a Viva paper towel. The dog prints and writing were piped on with chocolate buttercream frosting.

The Dog In Bowl Birthday Cake itself sat on covered cardboard, which I placed on 5 wooden dowels inserted into the dog bowl. (The final assembly was done on site so that it wouldn’t topple in the car.) Then using the chocolate frosting to help it stick, I put Cocoa Puffs cereal in the bowl as kibble. I also used the Cocoa Puffs around the bottom of the dog bowl cake to “finish” it.