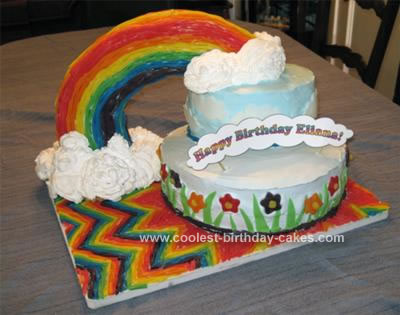 This year, we had a tie dye birthday for my 4yr old daughter’s birthday. Every year I like to make a cake that fits with the theme. So right away I knew that I was going to make the inside of the cake, rainbow with some sort of tie dye effect. So I figured I would stick with the rainbow idea and make a Rainbow birthday cake! (plus my daughter always says her 2 favorite colors are pink and rainbow!)

About the cake: The two bottom layers are “rainbow”. You need to separate the batter in to different bowels and dye each one with different food color (I used gel food coloring because it’s more potent). Then you pour each batter into the middle of the pan, one at a time, one on top of each other. The top two layers of the cake are chocolate (because that’s my daughter’s favorite).

So I like to make these things in advance and freeze the pieces because it’s easier to frost and assemble when it’s frozen.

The Rainbow and clouds: constructed from rice krispie treats (RKT). I created the shape by taking my biggest round pan and placing a small Pyrex bowl in the middle of it to create a mold. I then poured the RKT into the mold. After it cooled a bit I took it out and stretched it out and sculpted it until the shape was just right.

The cake board, well, that’s a couple of bags of rainbow Twizzlers and a few hours of good TV!! I just cut and glued (with frosting) till I got the design I wanted.

Construction of the cake, I layered the cakes with frosting to combine them and create the large base and smaller top. I like frosting the cake rather than using fondant because I don’t like the way fondant tastes. I still used a bit of it for the accent decorations, like the grass on the bottom layer and the clouds on the top. I used 4 dowels in the cake so that it could maintain the weight of the rainbow without collapsing. The rainbow RKT was covered with the Twizzlers (same ones as the board). I put frosting on the RKT treats that were shaped like clouds to give them a poof and made flowers out of jelly candy… and was done!!

The cake went over very well, everyone loved it! But especially (and most importantly) my daughter was thrilled with it!! 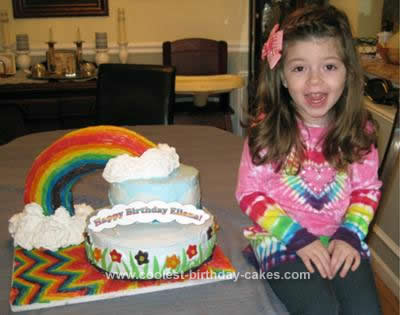 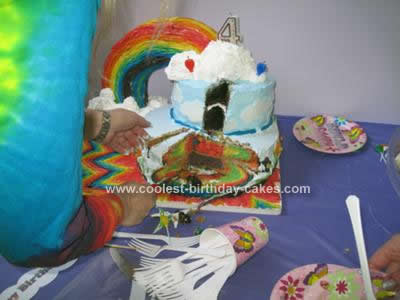