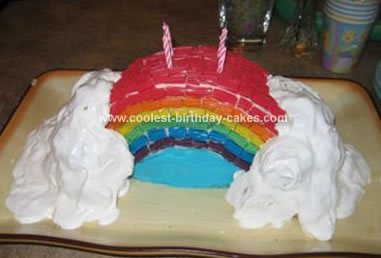 My daughter wanted a rainbow cake for her 4th birthday party. I tried to look for something online, but couldn’t find anything that resembled what I was picturing. I decided to at least start with a round springform pan, I only had one size and I think it is a 10″ one. I cut the top off so that it would be flat on the sides.

Then I cut it in half, iced one half and put them together with the top of the cake facing each other so it looked like a half moon. Then I put that cake on my serving dish with the cut, flat side down making the shape of a rainbow. I then iced the whole thing with cream cheese icing so I could put the candies on it before the party.

For the clouds I made another cake mix (rainbow bit) into 24 mini muffin tins (there was a lot leftover to make something else.) I piled them around both ends of the rainbow to make it look like clouds. The next day, the day of the party, I piped cool whip into all of the holes in the clouds and then all over the sides of the clouds.

I then took a spatula and spread it around and made it look like fluffy clouds. For the rainbow part I bought the rainbow colored licorice and cut it into small pieces, thinking that it would be easier to cut later instead of long pieces of licorice. Then I put them in place on the cake. Starting on the top with red and doing the colors of the rainbow. I did purple instead of indigo and violet. I also made some of the icing blue and put it under the rainbow to make it look like sky.

It turned out really nice, but it was still hard to cut. I served the muffins to the kids and just put extra licorice pieces on top, so they would still get the candy.