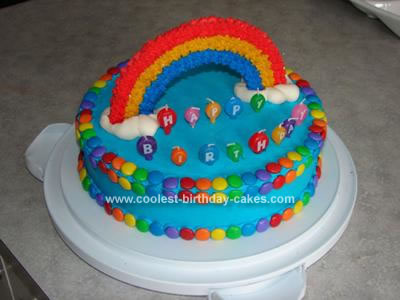 My daughter decided she wanted a “Somewhere Over the Rainbow” third birthday party, but didn’t want anything to do with Dorothy or the Wizard of Oz, so that threw out half my ideas right there. lol.

I decided to do a cake with a stand up Royal Icing rainbow on it. I found a pattern at Wilton.com for a three band rainbow that fits on an 8″ cake. It’s meant to be piped directly on the cake, but I laid the pattern underneath some wax paper and piped it on that using the Royal Icing recipe I also found at Wilton.com. I made several rainbows in case any of them broke, and let them dry for two days.

To get the rainbow colors in the cake, I separated the batter into 6 colors and tinted each one a different color of the rainbow. Then I poured them into the cake pan in reverse order. (Purple, Blue, Green, Yellow, Orange, Red – I didn’t bother with Indigo). According to the website I found they should layer themselves like a rainbow if this is done. Unfortunately it didn’t work this way for me, but it still made a very cool tie-dye rainbow pattern that the kids and adults alike all loved.

I tinted the icing sky blue and did the entire cake in that color. I got two bags of Smarties (These aren’t generally available in the States, apparently Smarties are something completely different there than what we have here in Canada. So you can just substitute M&Ms instead.) I picked all the rainbow colored ones out of the bags and made a border around the top and bottom of the cake.

Then just before the party I piped some white icing for clouds and piped some icing between two of the best rainbows and stuck them together for extra stability. I stood the rainbow up in the clouds. The final touch was the “Happy Birthday” balloon candles my Mom found at the local dollar store. It suited the cake perfectly. 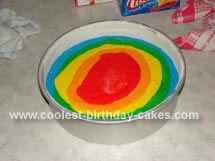 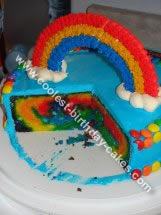 3 thoughts on “Coolest Somewhere over the Rainbow Cake”