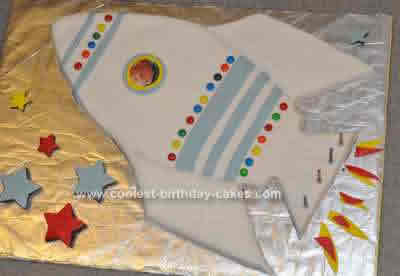 My son asked for a rocket cake for about 6 months up to his birthday. Thanks to other photos on this site and my own research, I think it turned out pretty well.

I used the chocolate groom’s cake recipe from the Wilton site. It was really moist and yummy and held up well. If I were to make it again, I would freeze the cakes for 20-30 minutes before shaping and frosting to make it easier. I made 2 of these in a large rectangle baking pan. I weighed the batter to divide to be sure that my cakes would come together at the same height.

I used the chocolate buttercream recipe also from the Wilton site. Once made according to the directions, I added about 1/4 cup of plain, full fat, Greek style yogurt to cut the sweet and make the frosting more spreadable. This is now my go-to chocolate frosting recipe. Sooooo good. Used a single recipe.

Like others on this site, I used the marshmallow fondant recipe from this site. I did a trial run where I couldn’t get it to turn out. Then another trial run where it worked perfectly. I used Wilton food coloring to make the colors and I’m really glad I did. Their food coloring is much more concentrated then the kind you get at the grocery store and works way better. Be sure to wear gloves when kneading in the color or your hands will be stained forever. I made 2 batches, but 1 would probably have been enough.

I taped together a couple of pieces of white paper and drew out the rocket shape. Then I shoved the cakes together and laid the paper on top and cut around. Worked great. At first I was worried that one cake layer wouldn’t be enough, but that two would be too much work. One worked out perfectly. It looked nice and there was plenty of leftovers (even though we had 30+ people at the party). The cake board is covered in foil, then clear contact paper. I frosted the cake with the buttercream. I rolled out the white fondant and cut around it using a pizza cutter. It’s really important to leave a little extra so the seal along the cake board is solid. Mine wasn’t and chocolate frosting leaked out in some places. Next I kneaded in color and used the pizza cutter to make stripes. I really wanted those little eatable silver balls for the decoration, but couldn’t find any. The M&Ms worked great.

The decorations are just sort of laying on there. When I tried to seal them down with frosting it made a big mess. I noticed on a cake show I watched the other day, they seal their fondant with a clothes steamer. A little water probably would have worked too, but I didn’t want the colors to bleed. I also wanted paint the white fondant with silver luster dust, but I couldn’t get the technique right. For the photo of my son, I just printed one out on regular old photo paper and laid it on top of the fondant window. For the stars I just used a star cookie cutter in different sizes for both cake and fondant. People ate these up too!