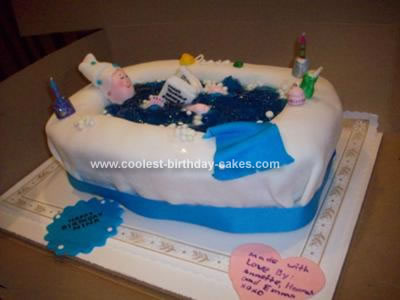 My friend always reads in the bath so thought it was apt for me to make her a bath cake, with that in mind.

I first baked 2,9″x13″ rectangle cakes. When they were cool, I shaped the edges to appear like a bath. I used an already prepared vanilla frosting and added some almond flavour and also choc chips to sandwich them together. I then scooped out the middle area, and then covered the whole thing with fondant.

I slit a few areas in the sunken part so it was easy to fit around the edges of inside the bath. Then I made the head, knees, shampoo, conditioner, candle holders, sponge, soap, towel, book and hands out of fondant. With the towel I used a pencil to set it in the wavy position and also cut the edge with scissors.

The sponge is just a blob of fondant I coloured yellow and poked holes with a toothpick. The towel wrapped around her head was just rolled white fondant, then added confetti to add a pattern. I then made the hands and put painted nail polish on with an edible pen and also wedding ring for extra touches.

Her husband is an author so I thought it was more memorable that I would write with edible ink the name of his book. I kept the inside parts separate, and then added the berry blue jello, this will probably be the last time, as although it came out effective, it was difficult to work with, as it was dissolving the fondant.

I then placed the head/knees/hands and book, on toothpicks and then stuck them into the cake through the jello. Then added balls of fondant and also some little white candies so they wouldn’t dissolve on the jello parts. Then dressed it with a ribbon around the sides.

It was so much fun to make and was well received. Would maybe use a different material for the water.

Coolest Baby in a Bath Cake