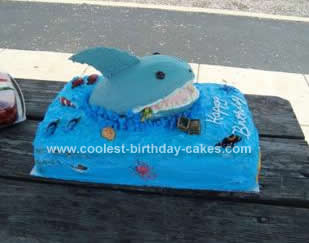 My nephew is into sharks right now and loves Jaws so I decided to make him a Sharks World Birthday Cake. My niece is taking classes right now so I asked for her help. We had 4 13 X 9 cakes and filled it with Bavarian crème filling.

For the shark head we used a football cake molding pan and made it out of pound cake, so it would be heavier. For the bottom part of his mouth we trimmed one of the football molds flat. We then took the other football mold and cut the back on an angle to give the effect of an open mouth. We cut the top of the football to make it lay flat on the cake, and one of the sides on an angle to give the effect that he’s coming out of the “water”.

We then took the other football mold, layer it on top of the other one and lifted up the front of it to give the effect of the sharks’ mouth being open. To keep it that way we took the trimmings of the bottom half and shoved it towards the back of his open mouth to keep it stable.

We then frosted the whole thing in the colors shown, made the teeth out of fondant, junior mints for the eyes, the fin is made out of cardboard that we just frosted with frosting. 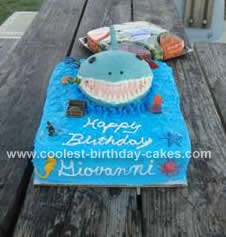