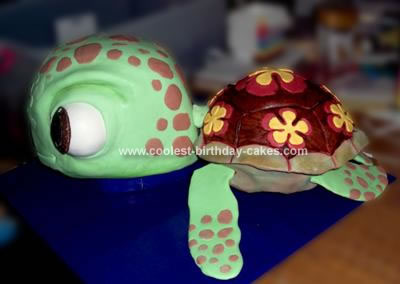 This Squirt 3D Turtle Cake was made for a 20 year old girl who had wanted a “Squirt” cake ever since the movie came out. I wanted him to have a bit more “movement” than other similar cakes so I decided to make the two main cakes (the head and the shell) on cake boards and then placed them onto covered polystyrene blocks attached to the main cake board.

The shell was covered with chocolate ganache and then fondant. The fondant was pinched along the shell edge and texture was added to define the shell sections. Using a mix of petal dusts I coloured the shell. Then I cut some blossoms in red and yellow and attached to the shell.

The Flippers were made from fondant covered acetate film and then inserted into the shell.

The head was torted and ganached and carved. Rolled sausage shapes were applied to emphasize Squirts eye ridges.

Then the whole thing was covered with fondant, textured and coloured.