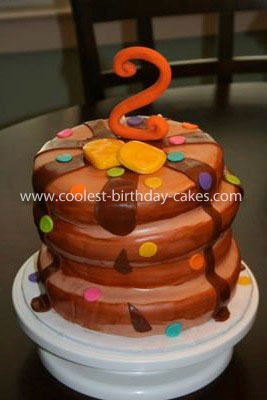 My friend was giving her daughter a pancake pajama party and asked me to design a Stack of Pancakes Birthday Cake with “sprinkles” to match the colors in her pajamas. I wasn’t sure I could pull it off but I got my creative juices flowing and I was so pleased with the results.

I began by baking and cooling 2 9″ round cakes and 2 8″ round cakes. I then alternated stacking them with a thin layer of icing in between each layer of cake. I started with a 9″ cake, then set an 8″ cake on top of that but slightly off center, another 9″ and another 8″ slightly off center. I then coated the entire cake with a thin layer of buttercream and refrigerated it for a couple of hours so it would be nice and set.

I covered the cake in a thin layer of fondant that I colored tan/beige with a small amount of brown food paste. The fondant was a bit tricky but working it slowly and smoothing it down and inch at a time all the way around the cake helps. I wanted each layer of the cake to have some definition so it was important that the fondant was tucked well around each layer of cake. Next I used a bit of brown food paste watered down with vanilla extract to paint along the sides and top of the cake to give it some definition.

The syrup was cut from a layer of dark brown fondant and gently laid over the top of the cake. I also cut out a few “drips” and placed them along the sides. The butter pats were also made from fondant and to give them a bit of shine I simply sponge painted them with a big of vanilla extract. The sprinkles were simply dots of fondant cut from different colors. The #2 was made from a bit of gumpaste. I stuck it in the cake by “gluing” a dowel rod to the back of it with candy melts.

I was so pleased with the results of this cake and the family was thrilled! 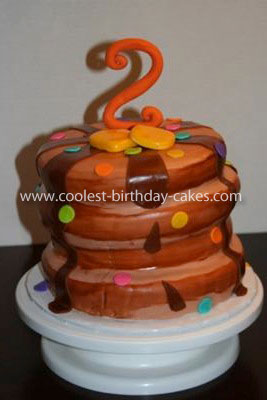 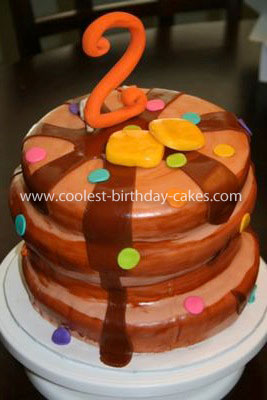