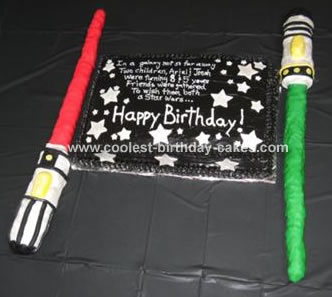 My kids wanted a combined Star Wars birthday this year. After much deliberation I decided on this Stars Wars birthday cake which pleased them both. I used chocolate frosting mixed with black food coloring for the actual cake.

The stars were made with fondant dusted with Wilton silver pearl dust. I wrote the birthday message as if it were the opening story in the movie. It wasn’t perfectly aligned but the kids didn’t care.

The light sabers were my favorite part of this cake and a lot of fun to make. The basic shapes are marshmallow rice crispy treats. I formed them alongside my son’s toy light saber so I could get the correct size and shape. I wrapped them in fondant and added fondant decorations to them as well.

The silver handles were made with white fondant covered in the silver pearl dust. I used gold pearl dust over the yellow decorations to make them appear more gold in nature. It’s hard to tell from the picture but the silver and gold really did shine quite well. I had originally planned on placing the light sabers on top of the cake but they wound up being much too large and would have fallen apart as they hung over the edge of the cake. Instead, I simply placed them on either side of the cake. It worked out well as each kid had their own light saber.

The party guests were more excited to eat the light sabers than the cake! Overall, it was a huge success!