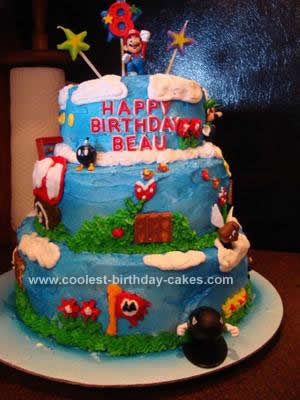 I am just a mommy whose son wanted a really cool Homemade Super Mario Bros. Birthday Cake. So, here is the result after 6 hours of decorating (I told you I am just a mommy, right?).

This is a three layer cake. The bottom layer is actually two cakes layered on top of each other. After stacking the cakes, I put a wooden dowel rod down the middle of the entire thing. Next, I knew I wanted the cake to be blue, but to get the right color would take too much icing gel. Instead, I frosted the cake white using my own icing and then sprayed it with blue frosting tint. Super easy to use, just be sure to cover EVERYTHING so that your kitchen doesn’t end up blue.

Now for the decorations…I had my son turn on the Wii and go to his favorite worlds in the game and show me what elements he liked the best. I drew pictures of each one and then designed the cake with those elements. For example, he wanted a star, a toadstool, a tube, coins, bricks, a vine, and fire spitting flowers. I used my Wilton tips for most of the icing scenes. However, I bought red and black icing in the tube because again I don’t like the taste of too much tinting gel. Oh yeah, I used Nutty Bar for the bricks. The majority of the ideas came from my son and of course I love looking at all the cakes here on Coolest Birthday Cakes. I did buy the Mario plastic figures at Toys R Us.

A huge undertaking, but a huge smile on my son’s face made it worth the effort and time. Enjoy! 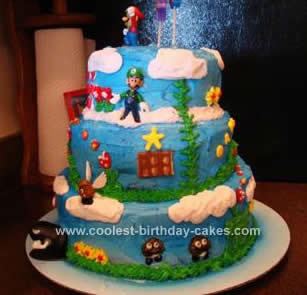 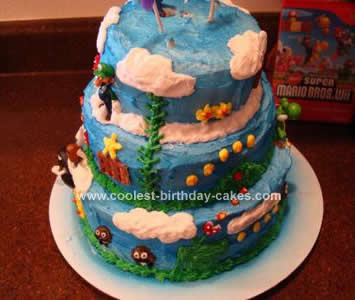