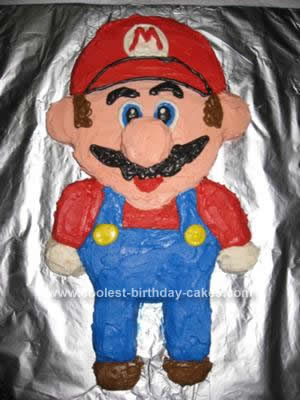 My 7 year old loves Mario. I was determined to make him a Super Mario Brothers Birthday Cake Design. So I started by looking online for ideas. I actually saw a cake on this site of just his head that I thought was pretty cool. Then I decided to make his whole body. I spoke with my sister who works at at bakery and is a talented artist. She doesn’t live near me so I only spoke with her over the phone.

I decided to make the cake from scratch so it would be more dense and easier to decorate. I used two round cakes and one square cake and a 1/2 dozen cupcakes. I used the round cake for his head and cut out his hat and lower body from the other round cake. I used the square cake for his shoulders and legs and arms. The cupcakes I used for the nose, ears, hands and feet. Once I cut out the pieces I froze them to make it easier to decorate. Once I put it together, I used a knife to outline where I would put the different colours of icing.

I made a butter icing and bought the gel colouring (you can buy from craft stores) so the colours would be vibrant. To outline the hat and the ‘M’ I just put some icing in a sandwich bag and cut a small hole in the corner.

Hope you like it. It was lots of fun. I’m going to try a Yoshi for my 10 year old’s birthday next month.