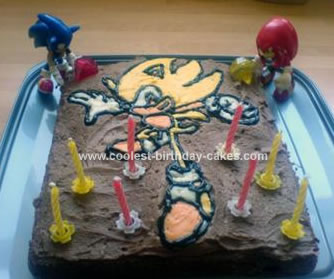 For my brother’s birthday, he asked for a Sonic the hedgehog themed cake, because he is going through a Sonic phase and was having a Sonic themed party. Unfortunately, Sonic is not very popular and so there were not many images of a Supersonic cake on the internet. There was so little choice that I had to choose another character – Sonic’s alterego Supersonic. They are pretty similar, but Supersonic is yellow not blue.

I wanted to try a new recipe for the buttercream as I needed pure white for the eyes and gloves, not just off-white. I looked on the Wilton website and found the American’s use vegetable shortening to whiten it. I had a nightmare trying to find vegetable shortening in England as it is not so popular, however eventually I found a shortening called Trex. I used Trex for the buttercream to make it white, then coloured some yellow and some orange for his shoes, arms and tummy.

I traced the image with piping gel onto some wax paper. I then stuck it onto the cake (made and iced before starting on the image) to leave a gel outline. It was very simple after that – I just filled in each section using the coloured icing and my piping bag. I smoothed with a wet finger and re-outlined it with gel so the outline was bold again.

To finish I stuck in some red and yellow (Supersonic colours) candles and some red and yellow “chaos emeralds” (sonic toys). I raided my brother’s toy collection to find the emeralds, and also found some models of Sonic and Knuckles (the red one). I stuck them on the corners with their hands outstretched as if they were grabbing for the emeralds. The figurines were the perfect finishing touches and I though it looked so busy with them all on there, that I didn’t even bother piping a border.