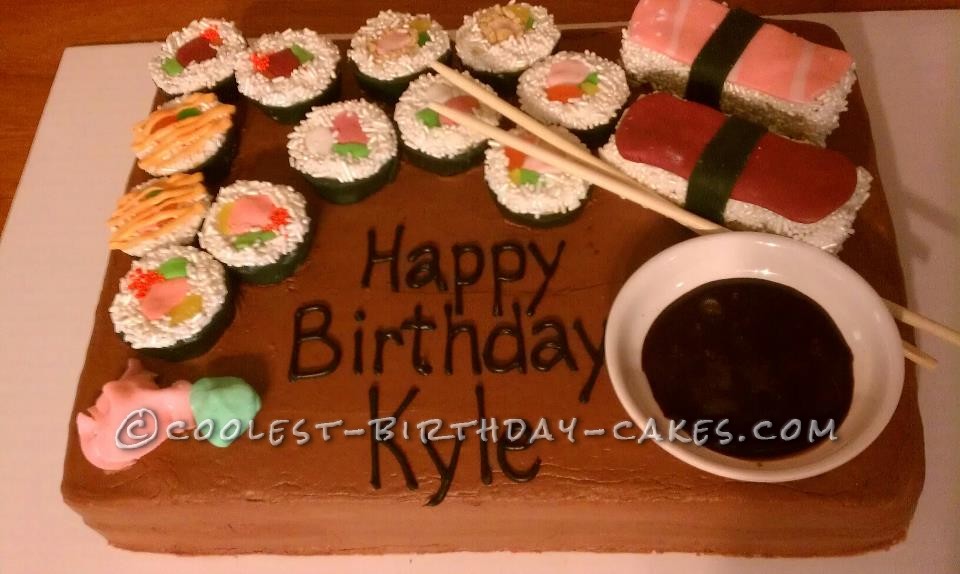 I made this Sushi cake for a friend that has a mutual love for sushi! The board was just two layers of 9×13 white cake with white icing in between. It was then covered with white icing tinted with brown gel. The pieces of sushi were made with mini cupcakes (rolls) and mini bar cakes (Nigri). The cupcakes had the tops cut off and were completely iced in white icing. I tinted some homemade marshmallow fondant with Kelly green and black to look like Nori and wrapped thin strips around the sides.

I then dipped the tops in white Jimmies to look like rice. The bars/Nigri were iced with white icing as well and were coated in the Jimmies first. I then tinted some fondant lightly with pink and Kelly green to make the Wasabi and ginger. To make the salmon, I tinted the fondant antique rose with a tiny dot of orange. I then rolled it out, layed some white strips across and rolled it out some more. The tuna was made with burgundy and red (I just mixed until it looked right). I topped the bars/Nigri with the “fish” fondant and then wrapped a strip of “Nori” fondant around them.

My kids love “Dots” candies so I took some of the orange, green and yellow ones and cut out little chunks and strips to add to the rolls. The “roe” is actually orange nonpareils. To create the look of crunchy shrimp, I used crushed up “Cinnamon Toast Crunch” cereal. The spicy sauce was white icing tinted lightly with orange gel, and I added some red sugar crystals. The chopsticks are regular old chopsticks, and the soy sauce is chocolate syrup in one of my dipping bowls.