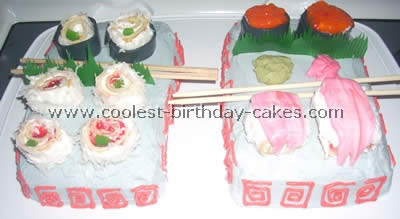 My husband wanted a specialty cake for our anniversary so I made him a sushi cake seeing as we were having sushi. I made a 9 x 13 cake and basically cut it in half for two plates and frosted it with buttercream icing. It would have been easier to decorate the sides with the red design before I put the sushi on it but I didn’t. For the sushi I used little Debbie’s, the strawberry shortcake kind and cut them in slices. I frosted them and rolled them in coconut. The strawberry filling looks like the crab and I sliced some green fruit snacks for the avocado.

For the orange sushi I used a little Debbie cut up, put little candy decors on top wrapped it in fondant and covered the top with orange gel icing and orange sprinkles. The shrimp pieces and the ginger are fondant as well. We ordered sushi for dinner so I had some chopsticks and the green grass to put on it too.

I made this specialty cake for a friend’s birthday who loves sushi. The bottom is just a two layer cake. On top I added the sushi. The white roll is Twinkies iced with vanilla frosting and then rolled in coconut and sliced. Afterward I stuck cut up gummy candy in the cream center on the Twinkie and put orange sprinkles on top.

The ginger is dried fruit (mango I think) and the wasabi is just tinted vanilla icing. The only things not edible are the real chop sticks and the green dividers that I saved from my last sushi meal!

This was a specialty cake idea I came up with after looking at other sushi theme cakes. The cake is covered in buttercream frosting. Then I used fondant for the wasabi, chopsticks, platter seaweed and sashimi. The sashimi sits on top of molded rice crispy treats.

The soy sauce is chocolate syrup with a little bit of crushed nuts on top. Then I used some store bought orange gel frosting for the caviar. The sushi rolls are sliced Twinkies filled with sliced strawberries and kiwis. I moistened up the fondant on the outside of the rolls and rolled them in green sugar confetti for shine. The ginger is white chocolate flakes that I colored and then placed in a small ball of similarly colored fondant to stick.

I decided later to add the soy sauce packet and green grass (non-edibles) after I went to a grocery store where they made their own sushi. The nice sushi man gave me extras of the green grass.

I made a two layer chocolate cake with peanut butter and cookie filling. Sushi rolls are made of cake scraps cut with circle fondant cutter and/ or by hand. Flaked coconut was used for the “rice”. I also used dried fruit, nuts and fondant.

This Sushi cake is made from stacked rounds. The sushi is fondant with fruit roll ups as the outside. The shrimp is hand-molded fondant and had painted with food coloring. The plate and chopsticks are from a chocolate mold.