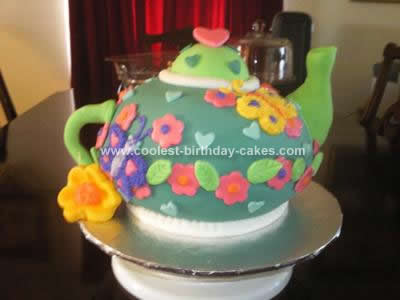 I made this Teapot Birthday Cake for a friend’s daughter. I baked the cake in two bowls using 2 cake box mixes. It was filled with whipped frosting and strawberries. The cake was decorated based on the party decorations. Using fondant from a box, I tinted it different colors and used cutters to cut out the shapes: leaves, hearts, and flowers.

I formed the handle and the spout first in order to give them time to dry. I also hollowed out the spout because it was too heavy. Both the handle and the spout need at least 6 hours to dry so I made those first. I turned the cake upside down and covered half of it with fondant that was cut out in a circle. I attached it with a little buttercream frosting and water. Then I turned the cake right side up and covered the other half the same way.

The leaves and flowers were used to cover the seam that went horizontally on the teapot. Then I added more flowers and little hearts to the cake. The flowers were dotted using purple and orange buttercream. A ball of fondant was placed under the teapot lid in order to give it a rounded lifted shape.

The two butterflies were piped in buttercream using tip 3 to outline and star tip 18 to fill the body. Finally, the handle was attached using toothpicks and the spout was attached using skewers that were cut to fit. It was a lot of work.