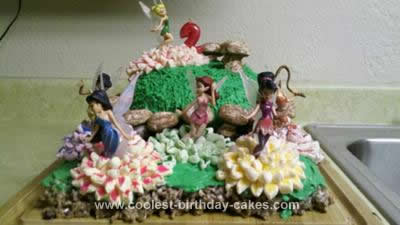 I never made a specialty cake before (other than bake a cake out of the box and slap icing on it and call it done) and wanted to do something very special for my 2 year old daughter since I missed her 1st birthday since I was deployed to Afghanistan. Her Godmother, gave her one of her birthday presents early and it was Tinker Bell and friends figurines. And since 3 friends/cake experts I knew had to turn down my request for a specialty cake order for my daughter due to conflicting issues, I decided to go for it on my own and make her a Homemade Tinkerbell and Fairies Birthday Cake.

My family loves rice crispy treats so I figured that the ground base should be made of chocolate rice crispy so it looks like dirt and also will taste delicious! I used butter cream icing with green food coloring as grass. I then made a mound with a round Pyrex glass using Funfetti cake batter and green butter cream icing and picked with a toothpick to look like grass.

The mushrooms took me the longest. They are made out of meringue and tubed out the tops separate from the stems and glued together with chocolate icing then rolled in cocoa powder to present the effect of dirty mushrooms and give the meringues a nice cocoa taste. I used chocolate icing, as well, to stick them around the mound and on top of the cake (No toothpicks were used since they can easily be lost and accidentally be put in the little mouths of our babies).

The mushrooms looked so real, it fooled a few of our friends who wondered why we would put mushrooms on a birthday cake…lol! All the figurines were mounted with half a cupcake and glued down with icing. Then I covered the mounds with icing to stick the flower petals. All the flower petals are made of colorful mini marshmallows cut in half and dipped in colorful sugar crystals on the sticky ends. Then shaped to look like petals and then pushed in around the icing until it took the shape of petals, I then put white candy mini pearls on the center of each flower around the figurines’ legs.

Tinker Bell was my favorite on top since she looks like she is using her wand to light the number two candle. Overall, my first cake took me 13 hours (5 hours on the mushroom shaped meringues). But now that I know how to do it, I can probably cut my time down to 6-8 hours including the 24 cupcakes that I made with flower pedals and mushroom shaped meringues on them. 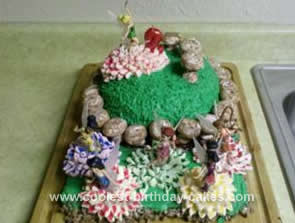 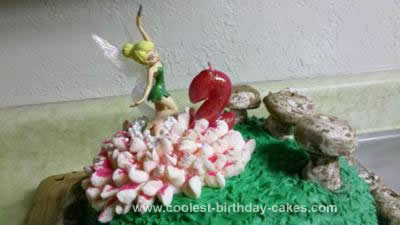 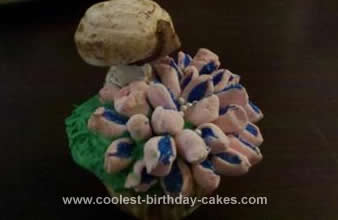