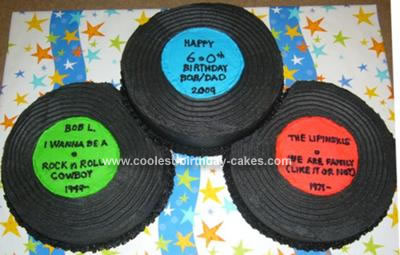 I made this Vinyl Records cake for my father-in-law’s 60th birthday party. I started with an 8″ round cake with a 3″ depth from Wilton, which is used to bake an entire cake mix. I baked two cakes, one a confetti party cake and the other is a chocolate fudge cake. (Each cake takes about 55-60 minutes to bake.)

I started with chocolate buttercream icing that I dyed using black gel coloring. (It took about 2/3 of the jar to get the color right, though it darkened upon sitting.) I iced each cake and then used a cake comb to get the grooves for the record. Next, I piped tinted white buttercream frosting on the tops of each to make the “label”.

Once each record was complete, I used a #16 tip to pipe a shell border around the base of the records to complete each one. The cake received rave reviews, even though their tongues were tinted a little black!