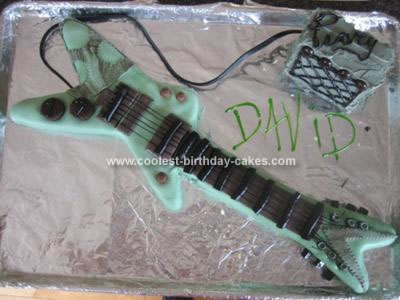 He chose a yellow citrus cake, which I preferred because it’s not only delicious, but also firm and easy to carve. I used two 9x13s to create enough cake pieces, knowing we’d have 10 kids or so at the party AND we wanted enough cake left to have a separate family gathering.

While the cake was baking I prepared the marshmallow and powdered sugar fondant, coloring the majority a bright-bright green, then two small portions: black and a marbled mix of dark green and black. I placed those in bags and into the refrigerator to “ripen” the color.

I downloaded a photo of the guitar for a “pattern” and free-cut the design, fattening it a bit to create more edible cake than a true-to-scale model would have. The neck was one single piece, and the headstock was a separate piece, both cut from the second 9×13. I made a large batch of buttercream frosting, colored it a light green, and frosted the entire cake with about 1/8-1/4″ of frosting. Next I rolled out the bright-bright green fondant and draped the body of the guitar, then the neck and headstock. I used a ravioli roller and a pizza cutter to cut away the extra fondant, and a butter knife to tuck the fondant in tight against the body.

The black fondant had become more brownish, which was actually a blessing. I rolled it out with a ribbed roller which left pronounced ribs that looked wooden. I cut a length with filigree at the end for the fretboard, and three broader pieces for the bridge and pickups. The brown-green fondant I used last, using the ravioli cutter to create a “Scream” face that I draped over the upper portion of the body.

I cut gourmet black licorice in half length-wise for the frets; rolled strips of aluminum foil on a pencil for the posts; short black licorice pegs for the screws; chocolate covered peanut butter cups for electronics knobs; and black embroidery thread for the strings. The half-cut licorice was heavy enough to help pull the strings taut and hold them in place.

Lastly I made an amplifier with leftover cake, stacked three-high. I darkened the buttercream frosting to a brown-green, and used black piping fr the grill. Junior Mints finished it off as control knobs. The cord was a real electric cord, cut from a PC power cable I no longer needed.