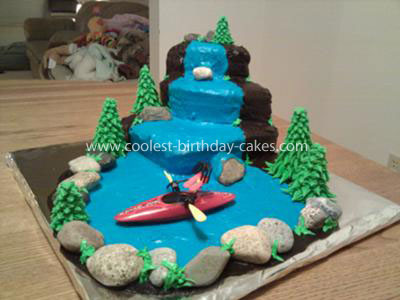 This Waterfall and Kayak Birthday Cake was for a boy who was turning 13 and who is very into white water kayaking! I found this website and based my cake off of Waterfall Cakes #9 and #18. The cake is chocolate with chocolate buttercream frosting. The water is almond buttercream tinted blue with Wilton’s Gel. I used almond buttercream and lemon curd for fillings.

This is just one cake recipe. I put half of the batter into a 9″ square pan, and half into an 8″ round. I cut the round one about 60/40 and then trimmed the corners. The back of the cake goes straight up. I split each layer and added filling, as well as filling between the main layers. This made 6 layers at the top!

First, I used a knife to outline where I wanted the water, then I iced the whole outside of the cake with chocolate. I went back to fill in the water after. Decorated with well scrubbed rocks. The trees were made with Wilton’s Royal Icing tinted green over a sugar cone. Kayak is a Hog-Wild “Benders” guy bought from REI.