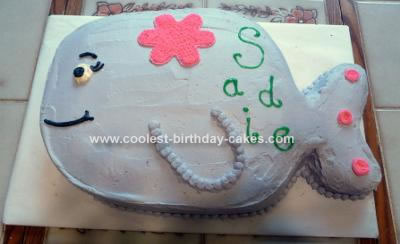 I made this cake for a friend’s 3 year old daughter’s birthday party. It was a last minute favor and I think the cake turned out well. She wanted a homemade whale cake design because her daughter was having an underwater theme party.

I started out by baking two 11 x 15 sheet cakes. I used two cake mixes, one chocolate, one white. Once cooled, I stacked one on top of the other using buttercream frosting. If you are using two different flavors then the stacking is just slightly different. I still used the sheet cake, I cut each cake (chocolate and white) in half and stacked them on top of each other. Then I placed both flavors side by side on the base and “glued” together with frosting.

I then carved the cake into the shape of an oval, leaving a little piece about 3 inches wide on one end to form the base of the tail. I took two of the corner pieces I had carved off and placed them near the base I had formed for the tail. Trim accordingly.

Then, I put a layer of buttercream on the whole cake to seal it. Popped in the freezer for about 30 minutes (I would recommend longer to decrease the crumbs in the icing) because this was a last minute cake. Once out of the freezer, I made up some white buttercream frosting using Wilton’s recipe. Set aside two small batches to make the pink and white. Colored the remaining frosting purple and covered the cake.

Once frosted, I used my cake tips to decorate. The flower was made by using a cookie cutter for the outline and then filling it in with the star tip. I made the black by tinting the left over white I had. I added 3 rosettes for the candles. I used some sparkle gel for her name. You can buy that in the decorating section at pretty much any store.

All in all, this homemade whale cake design was a really simple cake to make and only took me about an afternoon from start to finish.