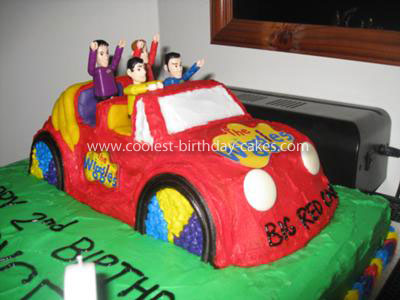 My son Bryce was turning 2 and every year I have decided that I will make his birthday cakes, this year there was no doubt that it had to be something to do with the Wiggles as Bryce is their biggest fan, ha ha.

So I decided to make him the Wiggles red car and do the whole party theme as the Wiggles. To form the base of the car I hired the vw cake tin from Delanys cakes and just cut the top off to turn it into a convertable. I had half a slab of vanilla sponge for the bottom section and just covered it roughly in green frosting to make it look like grass.

Now as for the car I cut 2 seperate section out, one for the front seats and another for the back ones, i covered the cake with red frosting and used licorice strips to make the wheels. I piped each coloured section insde the wheels alternating colours as I went around. I used 2 white chocolate buds for the lights and just used a black icing writing pen from wollies to do all the writing on the cake.

Now the hardest and more time consuming part was using the marzipan. I had to rub the 4 different Wiggle colours into the marzipan and measure and create the seats for the car, then Ih ad to roll out 3 yellow ropes to place on the back of the car.

All the icing on the cake was done by hand with a knife except the inside of the wheels. This cake did pretty much take me all day to make, but I am a bit of a perfectionist so it had to be right, ha ha. I was very proud of the finishing results and look on my son’s face when he seen the cake for the first time was well worth it.

I just have to say give it a go if you like doing this sort a thing. It’s kinda fun. I enjoyed it. 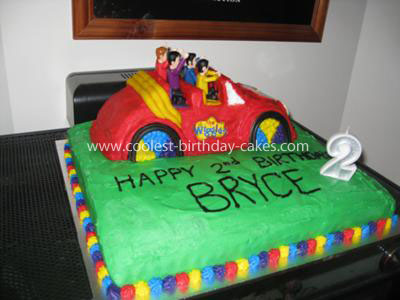 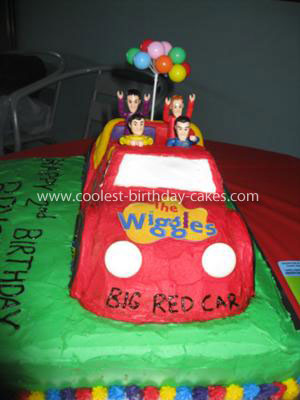 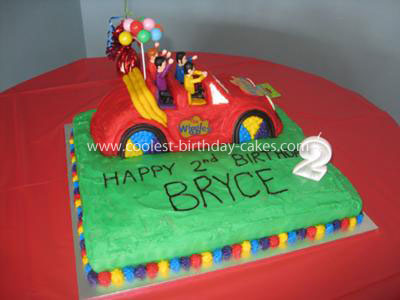