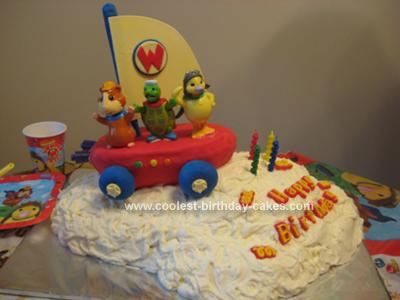 The cloud base of the Wonder Pets Flyboat cake is a 9×13 chocolate cake with a round 9″ white cake on the top right. I used a second round cake and cut off the edges and placed them on the front and sides to give the cloud a more “fluffy” shape.

I covered the base in a lot of white buttercream frosting. This was the part of the cake that we served. The flyboat was edible, but we didn’t use cake, so we just used it as a decoration.

The flyboat is a loaf of bread that has been covered with red fondant. I placed mini M&Ms on the side for the lights. The sail is a piece of gumpaste that I rolled out and attached to a fondant covered stick with egg whites. The logo is just circles of blue fondant topped with a circle of gumpaste and the red letter is cut out of red fondant. The engines are real marker lids off of our purple markers. The wheels are mini donuts covered with blue fondant. I cut out small circles and stars out of the leftover gumpaste and used egg white to attach them to the wheels.

The sail turned out great, but was quite heavy, that’s why we used the bread as it was more supportive than the cake. We also used a long Tinkertoy stick for the mast and after sticking it through the bread, we stabilized it in one of the round Tinkertoy pieces. They were not usable anymore after this, but they made the sail very stable so I didn’t have to worry about it falling over and ruining the cake.

After the base was frosted and the flyboat was assembled, we simply set it on top so it looked like it was soaring off to save the baby animals! The figurines are from a toy that my son has and made the perfect finishing touch.

Though it was time consuming to allow the gumpaste to dry and took a little while to assemble, overall, this cake was quite simple to make and it looked awesome. My 4-year old son loves the Wonder Pets and I knew it was good when he said, “Mommy, that cake looks really great!”