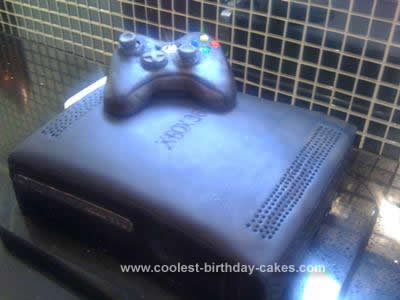 I made this Homemade XBOX 360 Birthday Cake for my son Logan’s 12th Birthday party. He and his friends are XBOX mad!!

I am fairly new to cake making – this is only the 3rd cake I have ever made so when I asked Logan what shaped birthday cake he wanted, I was horrified when he said an XBOX. Luckily when my son was out I was able to bring his console and controller into the kitchen so I could get some ideas of shape and size.

I moulded the shape of the controller out of marzipan first and left it to dry overnight. That night I moulded some little white buttons with the relevant letters on and covered them in coloured food gel, then made the control sticks from sugar paste. I covered it the next day in black sugar paste and placed the buttons etc into place.

I made two very large vanilla sponge cakes, once cooled I carved the sponge layers into the shape that resembled the console. I sandwiched together with jam and buttercream then covered the entire cake with buttercream. Then I covered the cake with the black sugar paste.

Once I was happy with the shape and the sugar paste had been smoothed, I made holes in the sides and edges of the top to look like air vents.

My son was delighted with it and his friends said it was the COOLEST cake they had seen. It also tasted great and feed approx 60 people. 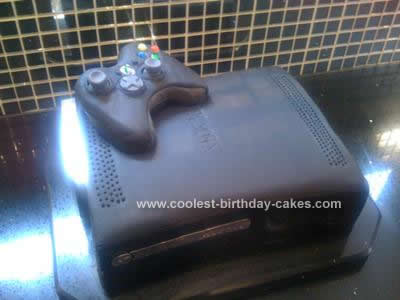 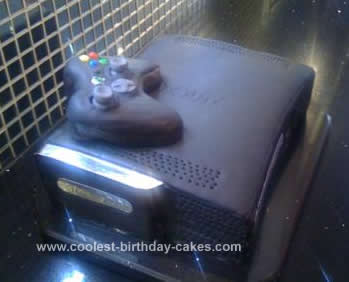 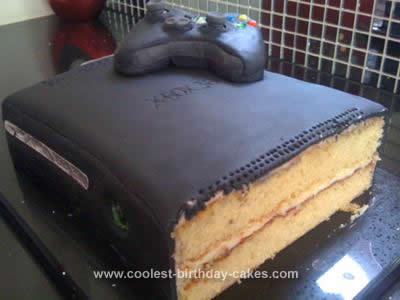