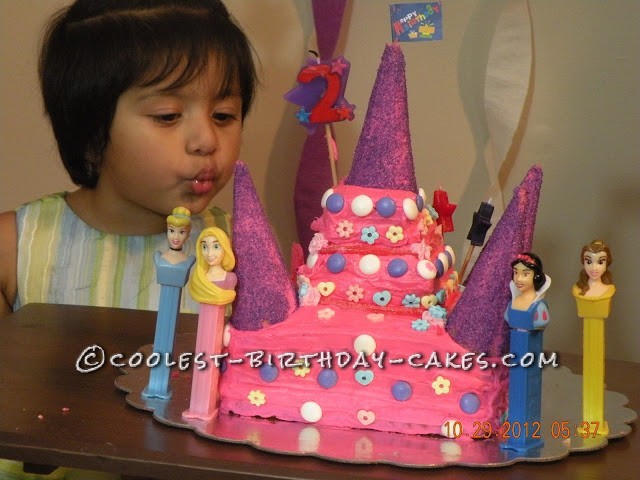 We took our daughter to Disney World for her second birthday and since her party was 2 weeks after the vacation and she could not stop talking about castle and Disney Princesses , I decided to make her a castle cake (in place of a Doll/ Princess cake I initially planned).

I used Betty Crocker cake mix (love them personally and were a hit as regards taste at the party). I had to use 2 cake mixes and then after letting it cool I used one 9X13 as the base and half of 9X13 cake (cut) as the second level and then  2 quarter pieces of remaining half of the second cake as the third level.

Used frosting (instead of butter cream as it’s less heavy and creamy, but that’s just a personal choice). Colored the white Betty frosting using Wilton no taste color in pink (we can do any color being gender specific or preference specific). Crumb coated all the levels and had it in freezer for 30-40 minutes for crumb cake and then did the frosting all over.

Ice cream scoops inverted down dipped in sugar sprinkle were used as towers and the sugar candies in shapes of stars and flowers all around for decoration. I used the candy corn (frosted in pink) in front as fence. I did not use any prop but all edible stuff as it was a toddler cake.

My prize : nobody wanted to cut it as they thought its too pretty to be cut.

This was my first ever attempt, so not perfect thou but was surely talked about for a long time by everyone especially my daughter and that makes it really special to post it here. 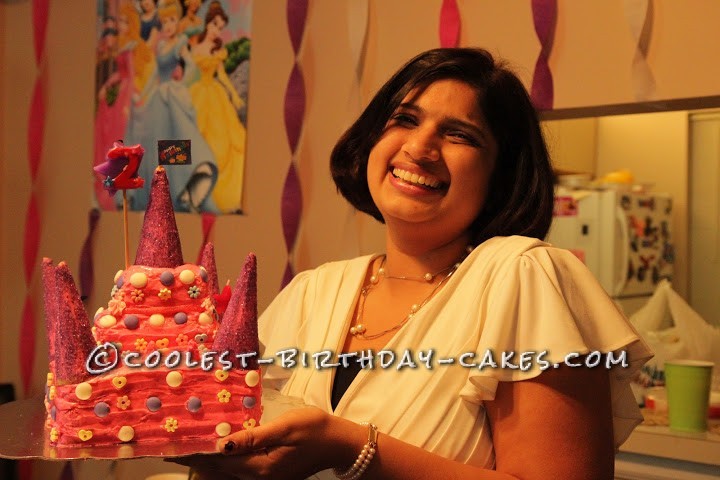