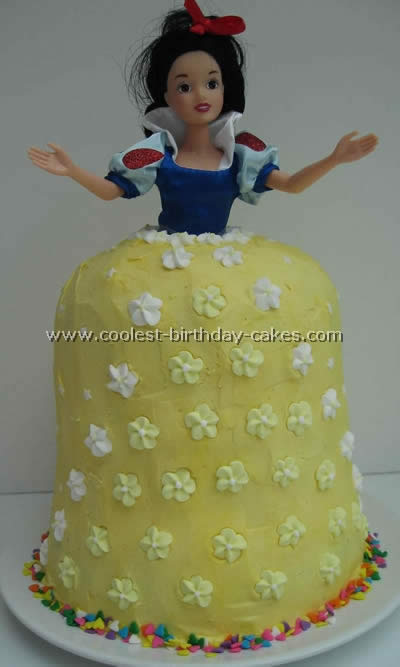 My friend’s daughter loves Snow White and desperately wanted a Disney Snow White cake doll. So after the cake was eaten the doll was her present from me. The cakes were made in a 6inch cake tin and the top one I carved to shape it a bit more curved for the top of the skirt. There are three vanilla whole wheat flour cakes with strawberries and fresh cream between.

I used cake cut-offs and stuck them to the cream so that the icing has something to stick to and doesn’t slide off. Then I cut a small hole (smaller than you think) and wrapped the doll’s skirt in cling-film up to her waist to protect it then poked her into the centre of the cake.

The butter-icing is dyed yellow to match her skirt and then decorated with flowers and stars. The bottom hem of the skirt was a bit messy where it met the plate so I put sprinkles all round which worked a treat.

I made this Disney Snow White themed cake for my twin daughters’ 2nd birthday. My husband made the Seven Dwarves cottage from cardboard. I iced it with royal icing then piped colored royal icing for the details. The windows panes are Nabisco Cheese Nips.

The cake is a full sheet cake decorated to look like the forest floor landscape. I bought the Snow White and Dopey figures. I am really proud of myself for making this cake because I was sick with pneumonia. I had been planning the cake for weeks then I got sick the week before the party. We had to cancel all the extra guests and the party ended up being just immediate family.

I used a boxed chocolate cake, split and filled it with raspberry filling, and frosted it with a sealing layer. I sketched Dopey’s face from a picture from Disney snow white, with a toothpick in to the sealing layer and used Pillsbury’s Creamy White frosting (colored with Wilton’s frosting dyes) to outline his face with a small rope tip.

I filled in the face with a small star tip, the hat with a large star tip, roped in his eyes adding a small silver dot for the glint. I just fluffed the green around the rest of the cake with a knife and used the large star tip to give the cake a clean bottom border. It was pretty simple and I got a TON of compliments for my baby’s 1st birthday -with her big toothless grin and dimples she could be Dopey’s sister!

I made the “skirt” using a doll cake pan. Since I bought a Disney Snow White doll to use instead of the doll picks, I cut a small circular section out of the middle of the cake from top to bottom to allow room for the legs. I wrapped her legs in saran wrap before inserting it into the cake to protect it from any dye that might get on it.

I used regular frosting for everything and did my best to get the skirt part smooth (by dipping my knife in hot water). I used a star shape tip for the bodice and a larger hole tip to squirt a blot of frosting for the sleeves.

That was my first doll cake and was pretty fun to do. Have fun!

I used a Wilton doll cake pan for this Snow White cake. The icing is colored and decorated to match Snow White. It was a big hit!

I made this Snow White cake for my niece who is turning 5. I used the wonder mold, 8″ round and a 12″ round. I also used a Disney Snow White Barbie doll. I used butter cream icing for the bottom cake, dress, grass and leaves. I used royal icing for the dress on the body and all the flowers.