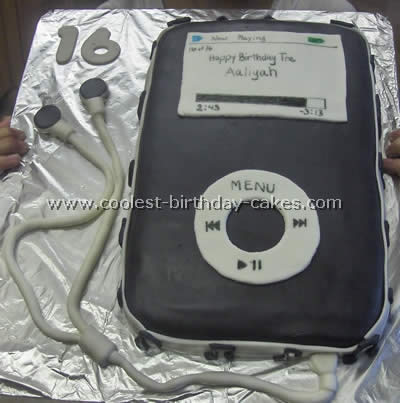 I made a 13×9 cake from one of the free cake recipes on this site and covered it with marshmallow fondant tinted black. I cut a square of white fondant for the screen and wrote on it with edible markers. I did the same thing with the menu circle. I shaped the white marshmallow fondant into ear phones. I tinted two marshmallow fondant circles grey then I pressed a plain napkin into it to give it the texture of real headphones.

Lastly I put white fondant all around the sides as a border and hand cut music notes to stick to it to make it look like music sheets.

I made this cake for my niece who shares a birthday party every year for the last 3 years with her sister. The little one is 3 and wanted a Barney cake. My Sister-in-Law wanted only one cake this year because they always have so much left over when I make two.

Feeling that my 10-year-old niece would feel left out, I made for her very own small cake that looked like the iPod she had gotten for her birthday (I used a mini loaf pan so she didn’t share it with anyone). It was only enough for her!! She was surprised and pleased to have a cake all to herself!!

As you can see from the pictures, she also loves Bon Jovi so that had to be one of his songs playing on the iPod.

This is one of those free cake recipes that is very easy to make.

I baked a rectangular cake and shaped the sides so they would have rounded edges. I iced the cake in buttercream. I also made some sugar cookies the shape of music notes to accompany the cake.