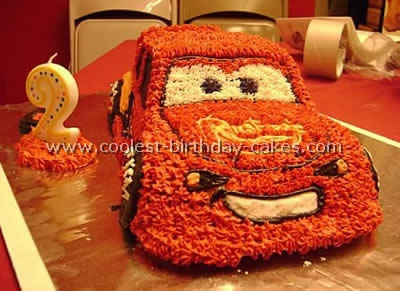 This is a 3D Lightning McQueen cake I made for a relative who was turning two. I used the Wilton 3D cruiser cake pan. Cut a small piece of cake from separate batter and carve a spoiler for the rear. Use skewers or toothpicks to attach to car. Pipe all smaller decals on before piping on the red.

I used the small star tip to pipe most of the designs. To get deep red color use about two and a half bottles of Wiltons Red (no taste) color icing gel. 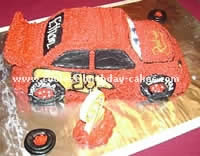 Cake by Samantha B., Kokomo, IN 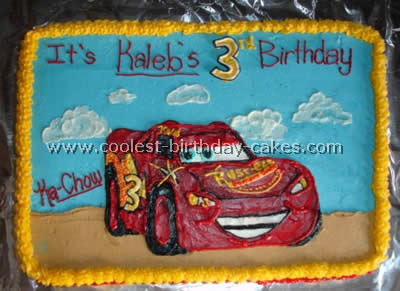 I baked this Lightning McQueen cake and make the icing a day in advance. On this cake I used a standard yellow cake with buttercream icing. I put the base crumb coat on the cake and let the icing set covered over night. After the cake and icing has settled overnight I put my base colors on. I started with sky blue for the sky and sand brown for the bottom. I then used black (I cheat and buy black and red premade) and did the checker pattern all around the outside of the cake.

After I had the border done I started an outline of Lightning with red icing. I found a picture that I liked and free-handed the car on to the cake. Then I filled in the car with red icing and smoothed it out in sections. I then did all the detail work in black, white and yellow. After I finished the car I did the writing and the edging. It was a big hit at the party. Everyone loved it! 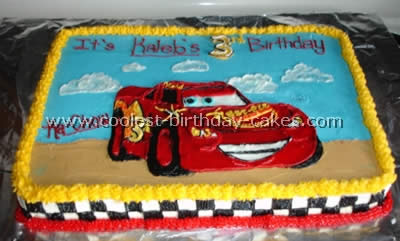 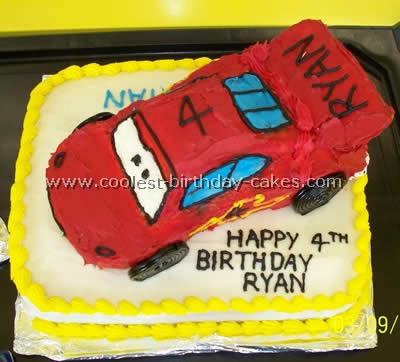 I used three boxes of yellow cake and baked two loaf cakes and one sheet cake for this Lightning McQueen cake. Then I chilled each cake and cut the two loaf cakes in the shape of cars. I used fresh buttercream frosting which I colored with the Disney Cars color gels packaged by Wilton. I used black licorice pinwheels for the wheels 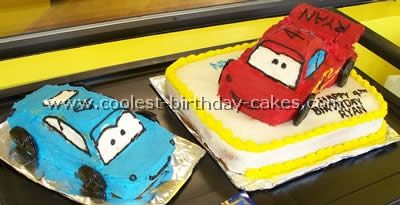 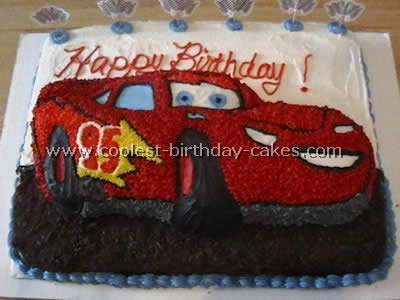 This Lightning McQueen cake I made as a regular sheet cake. The car is the cars mold. I frosted the sheet cake white and laid the Cars cake on top of it. I crumbled up Oreos and put them as the wrecked road from the movie. For me the easiest thing to do is mix the colors of the cake the previous day. It was out of the way and decorating was a breeze.

I used tip #16 for most of the cake. Fill in the lines on the car first with black. Then it’s as easy as coloring in the lines. 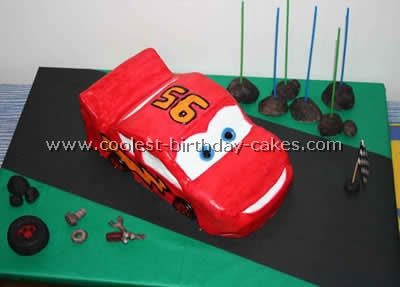 I made a large square chocolate butter cake then chopped it up into shapes and put them together with royal icing. Then I used almond icing to cover the cake and smoothed it over with sugar water as I went. I painted the cake with red food coloring mixed with sugar syrup. The numbers and lightning are icing gel and so are the eyes.

I also made the spare tire, rocks and tools from marzipan and painted them too. My son Elijah really enjoyed this Lightning Mcqueen cake. Some of the kids were shocked at the thought of cutting it up which was so funny.

Cake by Brandy B., Weatherford, TX 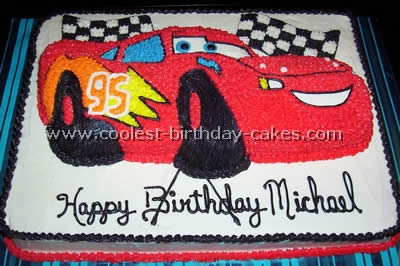 This Lightning McQueen cake used three Duncan Hines cake mixes. I baked two vanillas in a large rectangular pan and one chocolate in the Wilton Cars pan. The large cake was trimmed flat and frosted white with homemade buttercream icing. I placed the Cars cake on top of the rectangle cake in the center and frosted per pan instructions (available at Wilton online).

I added the two crossed racing flags after the car was finished, piped in with the star tip after outlining. The bottom was edged in black and the top edged in red for contrast using the #16 star tip. 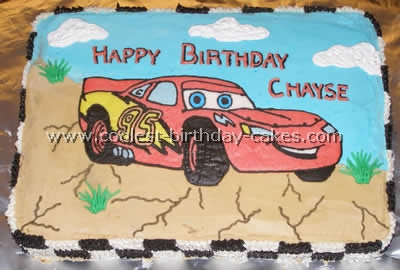 I made this Lightning McQueen cake for a friend’s grandson’s second birthday. The idea I got from the 2007 Wilton yearbook and this site. I used two boxes of rainbow bit cake mix to make two layers. Then I iced half the cake in brown and half in sky blue. I added the checkered design on the cake sides (all buttercream).

For Lightning McQueen I did a frozen buttercream transfer. I had read about it so decided to try it and I love this method. It gives a clean tidy look to your character. If you want to know more about this method, just Google it. One thing to remember when doing a frozen buttercream transfer is to flip your picture before you print it if needed (since you flip the icing over onto the cake). Fortunately my husband pointed this out to me or the number on the car would have been backwards! Once he was on the cake I added buttercream accents. 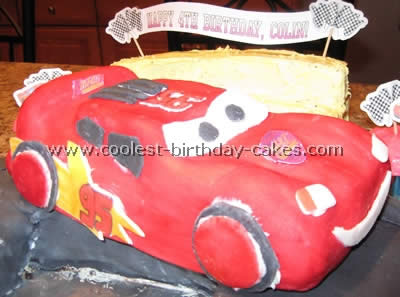 We dyed fondant and covered that cake. We used a stencil sponge to paint the car red because we could not dye the fondant dark enough.

The details on the car were cut out of fondant and glued on with icing. We did cheat a little and printed the “Rust-eze” logo on the computer.

We dyed coconut green for the infield. Then we included a grandstand finish line and some metal die cast cars to complete the cake. 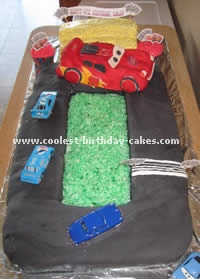 Cake by Jane B., Rockville, MD 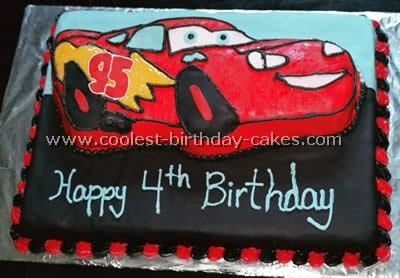 To make this Lightning McQueen cake I used the Lightning McQueen cake pan from Wilton. I frosted the cake with buttercream and then topped it with red fondant. I cut out a cake board to the shape of the car and placed the cake on it. Then I made a rectangular cake frosted with buttercream and topped it with blue and black fondant (to make the sky and the road). I put the car on top of that (supported with some dowel rods).

I did the details with colored buttercream and added shimmer dust in red (along the body of the car) to make Lightning sparkle. Then I piped shells along the bottom of the rectangular cake in red and black to tie it all together. My four year old loved it! 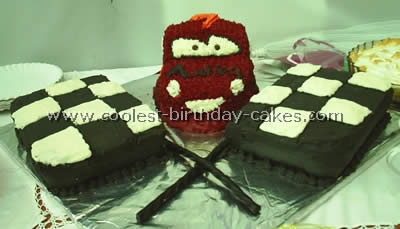 When I decided to make the Lightning McQueen cake I knew it would be a lot harder than the others I attempted. I wanted to try it anyway, so I started with a small rectangle pan and baked a sponge cake for the car. I did these two days before the party, told all that this part of the cake is not edible. Next I had my husband help me cut the car from the rectangle pan. We shaped it, iced and decorated and fussed until it looked like a “car”.

But I wasn’t satisfied as the cake was not edible and something was missing. So the day of the party I baked a large rectangle sponge cake which was meant to be under the car. However the car was too heavy so I came up with the idea from the “cars” reading book to make a flag instead. I cut the large cake in two and decorated it with white and black icing making it look like a flag.

This race track cake was a very big hit with the kids as well as the adults. 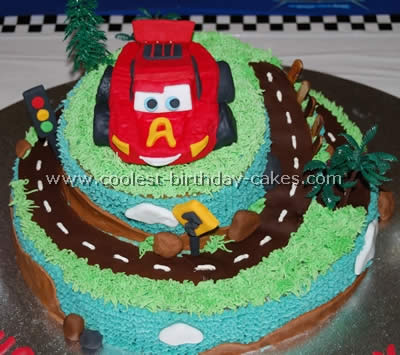 I got my inspiration for this Lightning McQueen cake from Rebecca’s NASCAR car cake. I baked one 10″ and one 12″ cake. Then I cut the top tier to about 7″ to have the slop. Then accessorized for the cake the street signs signal, lights and clouds which were make of fondant about two days before baking the cake. I used marzipan for the track and mountains as fondant doesn’t taste that great with butter icing.

The Lightning McQueen on top was made with a small square butter cake cut back to look like a car. This was also made about two days before making the race track in order to save time. You can freeze the cake for about an hour before shaping it to avoid crumbs and breaking. The guests as well as my two year old son went crazy over the cake.

Using a large pan shaped like a stock car I bake two boxes of store cake. I did carve the cake to make it look more like a Lighting McQueen cake. I used a buttercream base coat layer. Next I made my own marshmallow fondant coloring it as I made it.

Then I covered the cake with the fondant then slowly smoothed the fondant over the formed cake. I used some other fondant and make all the tires, numbers, eyes etc and placed them over the cake.